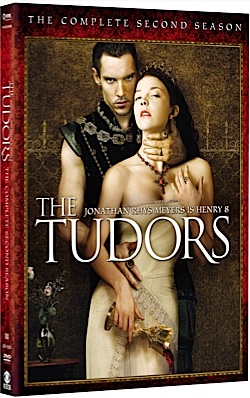 Henry VIII was a rock star in his day. Anne Boleyn was the fashion plate. Their doings were covered as the pop culture of their day (after all, there wasn’t much else to do). The doings of the Royal Family captivated the English people as much then as it fascinates today. It’s little surprise then that given the politics, power plays, sex, and war that The Tudors

had not come to television before Showtime debuted their interpretation in 2007.

With the third season poised to begin on April 5, it’s high time we looked at the first seasons, both now available on DVD from Paramount Home Video.

Today, most people know two things about Henry VIII: he was fat and he had six wives as he sought an heir. A few more would know he formed the Church of England in a major schism with the Pope so he could divorce his first wife and marry the more attractive Anne.

The series pens with Henry when he was young, virile and active. He was a sportsman, a musician, and well-read.  He was also rather randy since, after all, rank hath its privileges. He married Catherine out of obligation not love, although she loved him and remained faithful despite the horrible things done to her in his quest for marital freedom. Season one showed his displeasure with the situation and his growing infatuation with Anne, who wisely didn’t put out until they were married.

Season two followed Anne’s inability to produce a male heir, losing Henry’s attention as his eyes found Jane Seymour. His break from the Church finally occurred and he was left to build his own series of churches.

It’s all fascinating stuff, unless, of course, you know anything about the era then discover the 20 episodes aired to date are rife with anachronisms and inaccuracies. Writer/Creator Michael Hirst defends his choices as saying he was hired to produce entertainment not a documentary and that buys him a fair amount of latitude.

The liberties, though, compress events and change things around. For whatever reason, having seen one Pope in the first season, they bring his successor on stage for the second season, much as Henry seems to go through wives. To make the show work at all, a lot of time compression happens so Henry marries Anne when he’s in his thirties soon after the meet, not nearly a decade later. Perhaps the biggest change, but one that works dramatically was the death of Thomas Cardinal Wolsey.

The historic inaccuracies are lengthy but the show is slick and polished with a large cast that requires paying attention. From sets to performances, you rarely want to take your eyes off the screen.

The performances make the show riveting, starting with Jonathan Rhys Meyers as the volatile, restless Henry. Maria Doyle Kennedy suffers wonderful as poor Catherine while Natalie Dormer is captivating as Anne. Where Catherine was older and less attractive, Anne was colorful, younger and went after what she wanted, which was not only the King’s bed but the power that came with the crown.

Every story needs villains and in his own sly way, Sam Neill steals the first season as Cardinal Wolsey. Additionally, there are the scheming nobles, notably Anne’s father Thomas Boleyn, The Earl of Wiltshire, played by Nick Dunning with cunning.  Interestingly, fathers back then thought nothing of encouraging their daughters to sleep with men if it furthered their family’s fortunes (which was entirely the plot to [[[The Other Boleyn Girl]]], which failed to ignite the screen).

Palace intrigue plays out in each episode as everyone vies to better their situation with the exception of Thomas More (Jeremy Northam) who puts his faith and his word above politics and then suffers for it. And even though Pope Paul III had nothing to do with the events depicted, he’s a welcome anachronism since it gives us the wit of Peter O’Toole, seen all too briefly in the second season.

The two box sets come with their brief extras.  Several episodes have perfunctory commentary and the extras feel rushed.  The first season offers you a look at the production and costume design, the latter of which is well worth watching. You also get a brief glimpse of the contemporary locations where the story was set. On the second season set you have a stronger Tower of London featurette and a weak look at the modern day folk who can trace their lineage to Henry and his legitimate and illegitimate offspring. Both discs are stuffed with sample episodes for Showtime’s other series, an almost desperate cry of “Please watch me” and frankly, several are worth watching but the discs would have benefitted from the very documentary material the show never tried to be.

Before the third season kicks off, you can check out which Tudor you are with a quiz at the show’s website. Me, I qualified as an actor, presuming I was still alive at the advanced age of 50.