Review: ‘The Odd Couple’ on DVD 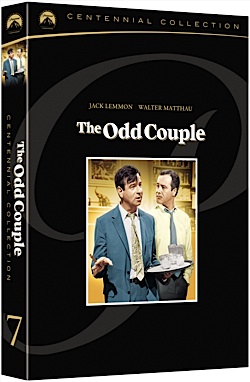 You know the music. You know the set-up and you’ve seen it played out in countless variations.  Still, there is nothing like the original.  Paramount’s Centennial Collection continues today with two more classic releases, including Neil Simon’s The Odd Couple

Based on his box office smash play (which in turn was inspired by his brother’s life), Neil Simon took the story of two mismatched divorced men trying to live together and made a sad state of affairs hilarious.

On Broadway, the inimitable Walter Matthau was matched with Art Carney, fresh from his run with Jackie Gleason, but for the film, Paramount exec Robert Evans went for Jack Lemmon, who played previously with Matthau in [[[The Fortune Cookie]]]. On screen, the two had chemistry in spaces and it was necessary to make this work.  One is a sports writer slob, the other a high-strung metrosexual (long before the word existed) news writer. When Lemmon’s Felix Unger is tossed out of his house, he makes several attempts at suicide before turning up at Oscar Madison’s pigpen apartment during the weekly poker game with the guys.  Madison takes pity on Unger and invites him in.

Over the course of three weeks, Unger spruces up the apartment, saves Madison a ton of money (so he can finally catch up on his alimony), and quickly drives his best friend nuts. And when they try a double date dinner with the Pigeon sisters, you see just how hurt Unger is, something Madison never seems to note until then. It just takes him longer to understand what to do.

The movie has a supporting cast of poker buddies filled out with the late John Fielder and Herb Edelman among the quarter. They show how the circle of friends are shades of Oscar and Felix and why they put up with—and support–one another.

The set pieces are brilliant, with terrific comic timing that remains funny even today. On the other hand, the 1968 movie is based on a 1965 play and completely is self-contained so you have no sense of the changes going through Manhattan and American society. As a result, it has a somewhat dated feel regardless of the fine direction by Gene Saks.

As with the first six releases in the set, the second disc comes with an assortment of original production commentary. Unlike the 1950s offerings, this one feels very thin with several short pieces interviewing the surviving production crew and cast, starting with Saks. Simon is nowhere to be seen.  Matthau and Lemmon’s sons talk about their fathers and what it was like growing up with them.  The shorts celebrate the brilliance of Simon and his script but it still incomplete.  Even though Brad Garrett is on screen talking about his part in the most recent revival, everything in between is ignored.  Not a word about how the concept gave birth to the first great sitcom of the 1970s, with Jack Klugman and Tony Randall taking these great roles and running with them for six seasons. Nothing about subsequent revivals of the play, nothing to show how it has endured.

Also missing were features that linked this disc to the overall centennial celebration which is a disappointment.

Still, the movie makes you laugh out loud and it’s nice to have a pristine edition for repeated viewing.