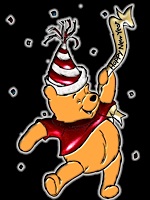 * New Pooh to view: Here’s a reason to celebrate: "In August, Dutton will publish Return to the Hundred Acre Wood, the first authorized sequel to the Winnie-the-Pooh books in years. The author is David Benedictus, who finally prevailed upon A.A. Milne’s estate to let him write a book. ‘We thought David had a wonderful feel for the material,” a Pooh trustee tells The Wall Street Journal. “No doubt some will say it’s not as good as the original, but it’s very good, and we’re pleased with it.’ " Call it a hunch, but I’ll bet that book isn’t cut in the publishing downturn. (Via The Daily Beast.)

* If Norse legends are good enough for Neil Gaiman, they’re good enough for J.R.R. Tolkien. HarperCollins has bought the rights to an unpublished work written before The Hobbit, The Legend of Sigurd and Gudrún, edited and introduced by Tolkien’s son Christopher. The work, written when Tolkien was professor of Anglo-Saxon at Oxford University during the ’20s and ’30s, makes available for the first time the author’s extensive retelling in English narrative verse of the epic Norse tales of Sigurd the Völsung and the Fall of the Niflungs. The book is expected for May 2010.

* Barnes & Noble’s holiday sales dropped, though not as badly as expected.

* Disneyland Shanghai? "Walt Disney Co said today it’s going to submit a joint application report with the Shanghai government to China’s central government to build a new theme park. The company was responding to a Wall Street Journal report saying the joint venture is for a $3.59 billion Shanghai Disneyland to open in 2014 with Disney taking a 43% stake while a holding company owned by the local government keeping 57%."