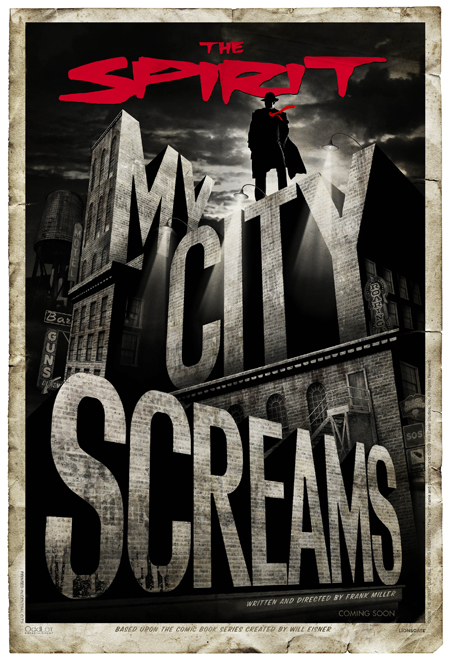 In the past, the holiday season is a time for at least one big box office hit, and while the period between 2001 and 2005 may have been taken over by Peter Jackson’s army of Orcs and giant gorillas, the pattern has been consistent. This year, however, you shouldn’t expect to be blown away, or even spend the money on admission with an adaptation of a literary or Hollywood classic, as Frank Miller and his motley crew try to pass off a remake of Will Eisner’s classic “middle-class crime fighter” comic. The film, as a whole, makes very little sense and will bring mostly heartache to fans of the source material, and on an original level, the movie jumps around both in mood, story, and even dialogue so much that it makes it feel like you’ve been watching [[[Sin City]]] fan film for over 90 minutes.

The movie should have simply been called a faux sequel to Sin City, because that is what it felt like. Gravely voices, over-the-top villains, and women in leather should just be what was written on the poster for this film, because those elements just about sum up what to expect. There are a few twists and turns, mostly in the tone of the film and how it jumps from a high-paced action film to a slapstick comedy around every turn. The inconsistency alone is enough to deter most of the audience, let alone the campy dialogue or ridiculous plot devices that would have Eisner spinning in the grave.

Those who were/are a fan of Eisner’s original story or even the later retellings know the basic story behind the hero: Denny Colt, a middle-class rookie cop in Central City is presumed killed, but actually goes into suspended animation, only to come back and create the identity of The Spirit, a man who is able to fight crime in a way local cops can’t, all while wearing a blue suit, red tie, domino mask, and a fedora. [[[The Spirit]]] never had super powers, but still had the same mystery as rival character Batman to the in-book villains. This new representation has The Spirit as a man who was killed, and brought back to life by a serum that gave him super powers, allowing him to recover from fatal wounds quickly and run across telephone lines. He now must take down The Octopus, his archrival who mysteriously has the same powers as our red-tied hero.

The worst part of the entire experience is that—deep down—there is a really great movie in here, a true testament to the original books which flees the screen about as fast as it enters with another piece of poignant dialogue like “I’m going to kill you all kinds of dead!” In between those lines, though, there are some truly warming moments, a few in particular between Gabriel Macht’s Spirit and Dan Lauria Commissioner Dolan. You will know the scene when you first see it, because it’s the only shot in the film which isn’t done in black and white and neither actor is hamming it up, which brings us to the film’s piece de résistance in the depressingly abysmal performance of Samuel L Jackson.

One of the biggest atonements to this film’s inevitable failure is the acting, mostly due to the complete misuse of the outstanding cast that Miller conjured up for the project. Sam Jackson alone should be enough to bring the film from the dirt to at least B-movie status, but Sam, along with the rest of the cast all seem to be acting in their own movies, without any real knowledge that there is an action-crime-drama being shot around them. Scarlett Johansson did a great job, if she was going for “I wish I wasn’t here”, while Gabriel Macht channeled Mickey Rourke, and Jackson went completely off the register.

Aside from the fact that each scene has The Octopus in a different ostentatious getup in every scene, from a Chinese robe to a German S.S. uniform, there are a few scenes where Jackson states that he was allowed to chew up as much scenery and go on rants that were all left in the film, wrongfully so, and all because Frank Miller was left the keys to the castle. Each other costar just felt like they were putting on a fashion show, like how the host of an award ceremony comes out in a different dress each time they address the crowd. Simply stated by Miller in a press conference, “the costumes play their own role.” You can also expect some award-winning cameos from the director himself and even comic patriarch Paul Levits stops by for some black-and-white action. 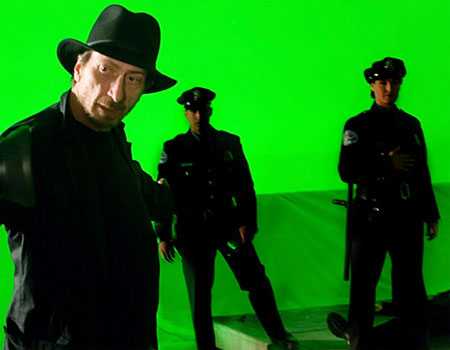 The fact that the dialogue and setting of the film are both conflicting and unsettling is an understatement. The original setting is set in the fictional Central City in the early 1920s, which fits the crime drama motif, while the film tries to go for the same feel, while there are blackberries and photocopiers high powered rifles. It would be fine to pawn off the cloning plot device as science fiction, but to bring in modern technology brought to us by Verizon just seems lazy. Also, there is an important line in the film that ends with “…and you’ll be dead like Star Trek” which should just confuse you as much as it did the rest of the world.

The special effects are just about on par with Sin City, and while there are a few nice moments where there are more colors in the pallet then red, black and white, those scenes are quickly snuffed by those same shots of white silhouettes on a black background that first got Miller to the position he’s in now 20 years ago. There are some pretty basic CG effects throughout the film, one of which involving some botched cloning that you won’t want to miss, but other than that and the aforementioned telephone-line-running acrobatics, the rest is pretty basic green-screen work.

Overall, this film can definitely be checked off in the miss column, and will go down with such films as [[[Howard the Duck]]] and [[[The Phantom]]]. While there are a few decent aspects to the film, you can’t walk away from the theater agreeing that the picture was worth the money to make, and will probably hinder studios from ever attempting to do Eisner’s character any real justice. In the end, it’s probably best to wait at home until [[[Sin City 2]]] hits DVD shelves. OVERALL RATING: 3/10