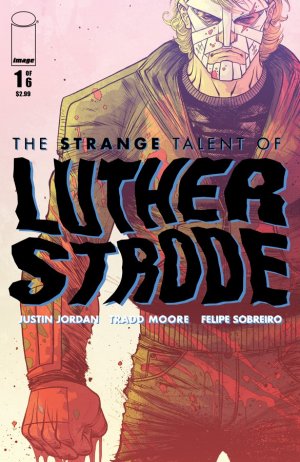 I was waiting in line at Modern Myths in Northampton, MA, picking up a few books. Among them, The Strange Talent of Luther Strode, a book I first heard of at NYCC, but in name only. My friends had gotten to the counter first, so (impatient nerd that I am) I flipped through a few pages of Strode while I waited.

Three pages in, I stepped out of line. I was not going to walk out of there without issue two.

The book revolves around (surprise surprise) Luther Strode, tall and lanky high schooler wanting nothing more than to beef up for the ladies. To that end, he orders a copy of the “Hercules” system (a parody of old Charles Atlas ads) to beef up. Miracle of miracles–it works!

Oh, does it ever work.

Strode is like the the mashup of a high school teen sex comedy and a horror flick. It plays a lot like the former, before surprising you with absolute bananas levels of violence. My friends can attest–I finished issue one while in a parking lot (outside of said comic shop) and would punctuate my reading with sudden “Whoa!”s and “Gah!”s. The book balances each genre brilliantly, with the horror flick making a small (yet memorable) appearance in this first issue. As for the teen sex comedy, it’s a little like if Revenge of the Nerds was less about the psychological victory and more about beating the piss out of people. 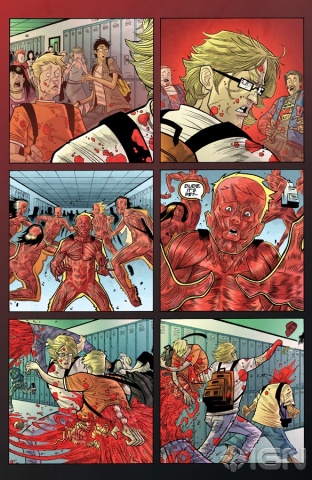 The art matches the story. It’s insane. It’s catastrophic. It’s brutal. The faces–be they interacting with a fist, or dumbly smiling that the girl looked his way (and, wow, what a girl–more on that later)–are real and vibrant. The art isn’t strictly realistic, but it doesn’t have to be. It’s endlessly hip. It gets the point across, even when the point is people bleeding profusely. It’s kinetic, and reminiscent of Chew.

There is a tremendous amount of character in these pages. I knew Luther, and his best friend. Hell, I wanted to be Luther (tall, blonde, long hair > 5’8″, brown curly hair and chubby) in high school. What’s more tremendous is that they have produced the only love interest that has ever really grabbed me in a comic. Lord, how many times have I destroyed myself for the witty girl with short hair.

It’s definitely in The Grey Area – this is a kid being imbued with powers because of a special artifact, but so far it falls well outside the tropes of traditional superheroism. Let us know what you think.

TL;DR Strode is up-to-date with a vengeance, a comic about getting what you deserve at a cost. It’s a six issue mini series. I’m buying every one.

The Strange Talent of Luther Strode #1 is written by Justin Jordan with art & cover by Tradd Moore, from Image Comics. Buy it at your local store, or from our Amazon webstore