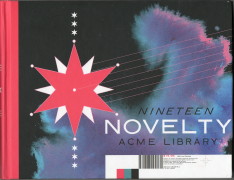 First of all, it’s just struck me how odd it is that the cartoonist universally referred to as “Chris Ware” is only credited as “F.C. Ware” – and that in tiny indicia and similar eye-straining matter – in his own stories and publications. One might almost posit a crippling social phobia or overwhelming shyness on the cartoonist’s part, a personality much like his usual viewpoint characters. (But then one remembers never to assume an artist is anything like his creations; it’s rarely useful.)

The last annual issue of [[[ACME Novelty Library]]] – number eighteen, for those who have difficulty counting backwards – collected the “Building Stories” sequence, mostly from The New York Times Magazine’s “Funny Papers” sections, but this volume returns to “Rusty Brown,” the long story that ran through most of issues sixteen and seventeen and does not seem to be done yet. These pages, a typically arch and distanced note by Ware informs us, “originally appeared in somewhat different form in the pages of [[[The Chicago Reader]]] between 2002-2004, and thus should not be interpreted as an artistic response to recent criticisms and/or reviews of this periodical.”

This time the focus isn’t on the title character, but on his father Woody – first, through a dramatization of a science-fiction story by Woody (luridly, but honestly, titled “[[[The Seeing Eye Dogs of Mars]]]”) and then through a sequence of events in Woody’s life as a young man in the ‘50s, fresh out of school and working as an obituary writer on a newspaper. Those events do lead to the writing of “[[[Seeing Eye]]],” and, near the end, back to the frame story of Rusty’s youth in the 1970s.

Do I need to tell you that young Woody Brown is painfully shy, ridiculously introverted, barely in control of his emotions, socially inept, clueless when it comes to the most basic patterns of living in a society, and completely unable to make any of his thoughts or feelings clear in any form of communication under any circumstances? Or did you already assume that when I mentioned that he was the main character in a Chris Ware comic?

Yes, Ware is once again beavering away with his fine brush on the little bit of ivory, two inches wide, to produce the same effect – a devastating, precisely measured, utterly controlled and deeply felt, emotionally draining effect, as ever – as previous Ware stories like “[[[Jimmy Corrigan]]]” or even “[[[Big Tex]]].” The problem with “Rusty Brown” is that it’s just the same kind of story as “Jimmy Corrigan” – a multi-generational story of loss, heartache, and complete emotional isolation.

“[[[Seeing Eye]]]” is a bit of a change, since it’s explicitly a science-fictional story and a story-in-a-story – not that the reader knows that, since the first page of Vol. 19 dives right into “Seeing Eye” without an explanation. “Seeing Eye” also features a hero somewhat more active and controlling than Ware’s usual, though he’s still ineffectual and cripplingly neurotic in the end.

And both “Seeing Eye” and “Youth, and Middle Age” – the title for the other section of the larger “Rusty Brown” storyline – are about the inability of Ware’s male viewpoint characters to understand or live with women. The unnamed hero of “Seeing Eye” is a pioneer on Mars, part of a four-person mission to colonize that red planet. And Woody is a junior reporter in Omaha, Nebraska in the mid-‘50s. But neither of them – despite initial luck at getting women – is able to progress much further, and both of them drive away the women they care about. (Or seem to care about – Ware’s characters are whiny little losers who rarely are able to see over their own navels to even notice other people have independent existences,)

But the existence of the nebbish who gets some is actually a new thing for Ware – previously, the nebbishes, like the various Jimmy Corrigans and Big Texes, merely failed to connect with women entirely. Now, at least, they’re engaging in joyless, guilt-inducing sex with the women they don’t understand; this may be a major advance.

“Seeing Eye” is in the vein of the dying astronaut story – in its milder ‘50s Galaxy incarnation, rather than the more transgressive Ballardian New Wave extravaganza of the next decade – and would be, if presented in pure prose of equal power, one of the stronger pieces in that subgenre. (Assuming, of course, that “W.K. Brown” really had written it in the mid-‘50s.)

“Youth, and Middle Age” sees Ware depicting something like dating, and, occasionally, a workplace. But, as usual, the story is placed firmly in the middle of Woody’s head, and we only understand as much as he does, which isn’t ever very much. (The woman in a red dress – I don’t believe we ever learn her name – who seduces him does so for no obvious reason; he seems a very poor candidate for her attentions, on many different levels.)

As always, Ware’s draftsmanship is brilliant, and his viewpoint characters always entirely believable. (Quite annoying, but certainly believable.) And – particularly given that these pages were completed at least four years ago – this section of “Rusty Brown” does see Ware trying to expand his repertoire at least slightly. Perhaps I’m being unreasonable to hope, someday, to see what happiness might look like in a Ware story. Well, then, I am being unreasonable. But it still would be a sight to behold, wouldn’t it?

Publishers who would like their books to be reviewed should contact ComicMix through the usual channels or email Andrew Wheeler directly at acwheele (at) optonline (dot) net.