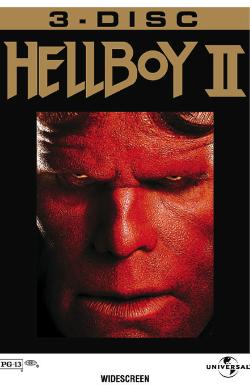 This is a first.  I’ve been living with the story for [[[Hellboy II: The Golden Army]]] since last Thanksgiving, when I accepted the assignment to write the novelization. However, given personal circumstances, I missed its release and am only now finally seeing it, nearly a year later, on DVD.   As a result, I’m looking at the film from some fairly unique angles.

That the entire production team and cast has returned is asset to film, out on standard disc and Blu-ray today. It looks good and clearly, there’s an ease and comfort between the principal players and their director, Guillermo del Toro.

Del Toro’s [[[Hellboy]]] is somewhat different in tone and certainly in story direction from what Mike Mignola has been chronicling in his Dark Horse comics.  And that’s fine, that’s part of the adaptation process.  That Mignola remains involved and is credited as a producer and for helping del Toro craft the story shows his willingness to see others play with his characters.

Since the first film, del Toro captured the world’s attention with Pan’s Labyrinth, and this follow-up film seemed to indicate a willingness to show he was not a one-trick pony. The film is therefore a visual treat. In terms of the story, we’re some months after the first film so Hellboy and Liz Sherman are now romantically involved and living together at BPRD HQ.  Beyond that, the other characters are somewhat static.

The story of an exiled elfin prince returning from exile to break an ages-old truce with Man is a strong one, especially given a world Hellboy knows is filled with freaks of all kinds.  We follow Prince Nuada’s efforts to assemble the crown that would given him command over the Golden Army, 70 times 70 mechanical soldiers built by the goblin forges. With them at his command, all humanity would be wiped out and the elves can regain control of the planet.

Mixed in with that is the stresses between Liz and Hellboy living together, Abe Sapien falling in love with the Princess Nuala, who opposes her brother’s jihad, and the exposure of the [[[BPRD]]] to the general public.  This necessitates Washington sending a new field leader, Dr. Johann Krauss, who happens to be an ectoplasmic being living in a containment suit.

There’s plenty of story and threads and everyone has something to do and people to play off one another.  Add in deadly Tooth Fairies, the last Elemental, a Troll Market, an Angel of Death, and the revived Army, and you have plenty to deal with. 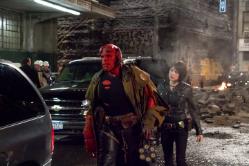 And in watching the movie, which moves along at a brisk two hours, it becomes apparent that del Toro has overstuffed the film.  No creature or plot line really gets a chance to breathe.  We are introduced to an element and then we’re whisked off to the next set piece so by the film’s end we’re entertained by what we’ve seen but it’s the equivalent of visual popcorn.  You consume it and you’re not quite filled. Instead, had del Toro focused on a few of these things, then the movie would have had a greater depth and pathos for an age that is coming to an end.

Prince Nuada is the spine that holds it all together and Luke Goss does a terrific job in the role.  He moves with speed and grace and is clearly a formidable opponent.  Had del Toro played him as the tempter, as he does in one scene between Hellboy and the Prince, then the last temptation of Hellboy would have given him a better character arc.  The passing of age, as described by the Elf King and later Nuada, should have been played up more.  As should the revelation that the BPD exists.  Instead, it’s tossed in the mixed and largely forgotten, especially with one scene removed showing calls for a congressional investigation.

The existence of Hellboy is one thing and the price of fame is certainly fleeting but when Liz holds his hands, the outrage theme is introduced then similarly discarded in favor of moving things along.

Krauss is an interesting addition to the team but is played as a fairly one-dimension Prussian general so when we finally learn something about him, it comes out of left field and then vanishes. Seth McFarlane’s voice work is fine but overall, the character does not play as well as intended.

Nuala, played by Anna Watson, is attractive and sympathetic but she’s under-developed so we don’t know why she chose to stay with her father through the millennia as Nuada was in self imposed exile (and where was he?).  She’s sympathetic and had potential but we needed more.

The movie is slick and inventive.  The fights are terrific and the action moves along just briskly enough to keep your attention.  We see Abe’s martial arts style in direct contrast to Wink’s brute force, similar to the contrasts between Hellboy and Nuada.  The trolls, goblins, Angel of Death, and Golden Army are all visually arresting.

In watching it, I also was mindful of dialogue that was not in either script sent to me, lines I would have liked to use.  I also largely agree with the trims del Toro made as seen in the deleted scenes extras.  The one bit, Liz and Hellboy in Brooklyn, actually rounded Liz out who is largely seen as dour throughout the film and should have remained. I was also surprised that the epilogue, which would have run after the credits, never got shot and only animatics existed so watching that expanded 5 minute sequence was fascinating.

The extras on the discs are the usual delightful assortment that show how films are made from concept through production.   Currently, the 3-disc set includes a digital copy which is a nifty plus.