Review: ‘Janes in Love’ by Cecil Castellucci and Jim Rugg 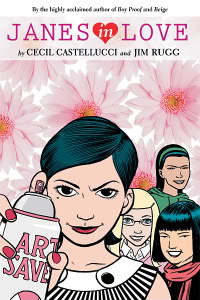 [EDITOR’S NOTE: This is the second in a series of reviews of the five books coming out from DC’s Minx imprint this year. Previously, Van Jensen reviewed Rebecca Donner’s Burnout. -RM]

series of books, as it features the not-so-original plot of a disparate group of teenaged girls bonding together for a cause and surviving adolescence.

That the series, with the second installment Janes in Love

($9.99) out in September, transcends its genre owes to writer Cecil Castellucci, who takes the conventional setup and spins it in unconventional ways.

The group of friends – all named Jane – in this case unite for the cause of art, seeking to beautify their small town through subversive means. Picking up from the first installment, the main Jane is caught up at Valentine’s Day with affection for two boys and a lack of funds to continue her art.

While those seem simple enough problems, the true center of the book are the unresolved tensions from the terrorist attack in the first volume, which sends main Jane’s mother into a near-coma. Subtly, all the plot threads take a similar tone as the characters, teenagers and otherwise, struggle with fears and insecurities.

The subtle complexities of the characters are captured with reserved perfection by Castellucci and rendered with great skill by artist Jim Rugg, who wields a masterful command of expressions in each panel.

The two [[[Plain Janes]]] books not only have been the best of the books Minx has published thus far, but also among the very best of young adult fiction. Sure, the cover’s pink and has flowers on it, but this is a comic for just about everybody.