Horror Review: No Man’s Land – Rise of The Reeker 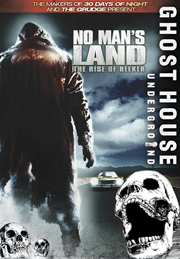 In this sequel to 2005’s [[[Reeker]]], a sheriff and his son try to apprehend bank robbers on their way to Mexico only to find that they are being stalked by a far more deadly enemy – the fire-wielding Grim Reaper known as The Reeker. Things start to get weird when the group—both good guys and bad—realize that they may not be on this plane of existence anymore, let alone the rest stop in Nevada.

Ever since [[[LOST]]] hit the airwaves, writers of both television and film have tried to capture the essence of an ensemble cast brought together, seemingly for a reason, to fight some big mysterious element. It’s a disorienting concept, meant to confuse and fool you, but in the end, it all comes across as a bit trite. [[[No Man’s Land]]] walks that line but is able to fall back on the idea of not taking itself as serious as a story like LOST.

Taking place after the 2005 film Reeker, a group of strangers try to survive after being trapped in a travel hotel in the desert and strange things seem to happen, like a creature with a flamethrower chasing them. While this is a sequel, it isn’t necessary to be caught up on the first film in order to enjoy this one. The background of this film’s characters are explained in the beginning of the film, keeping this story pretty self-contained. If you had seen the former, the ending may come across as a bit predictable, seeing as how it is almost the same movie.

The special effects in the film are pretty impressive, seeing as how they are meant to give the feeling of complete confusion and intensity, such as a disembodied pair of legs running away, or a bird on fire flying though the air. Of course, the antagonist running around with a flame thrower added a nice touch, (and even a bit scary, too), and there is certainly plenty of blood and feces in the film for you to squirm in your seat.

Obviously, the story doesn’t take itself too seriously, given the fire-wielding baddie and the fact that since they are in purgatory, nobody can really die (this explains the torso-less legs running around in the film). There are some fun campy moments from the sassy casino robbers, and even a fight scene with a resurrected fried chicken (yup!)

Overall, film did have it’s dragging moments in the story, but the twist ending made it all a bit worth it, leaving us clues strategically placed throughout the film. Fans of mysteries and horror will enjoy this, if they enjoyed the twists and turns of any given Saw film.