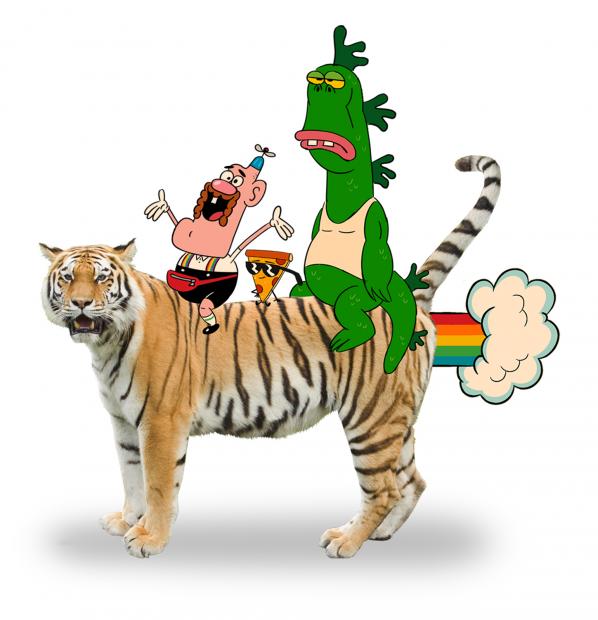 Artist Willy Elder called it “chicken fat” – the extra background gags he’d cram into his art for Mad, Little Annie Fanny, and elsewhere.  He described it as “The part of the soup that is bad for you, but where all the flavor is.” Cartoon Network’s new Uncle Grandpa is slopping over with “chicken fat”, but manages not to drown in it. It successfully answers the question, “What if Mary Poppins were not only male, but an idiot”?

A spin-off from Peter Browngardt’s previous effort, Secret Mountain Fort Awesome, the title character is described as “Everybody in the world’s Uncle and Grandpa”, a magic character that drives around in an enchanted RV with his compatriots Gus the world’s strongest monster, Pizza Steve (a sentient slice of pizza) and Giant Realistic Flying Tiger (who does what it says on the tin).  He drops into children’s lives and takes them on mad adventures, usually depositing them back home with lessons learned, that lesson usually being “Do not go on mad adventures with Uncle Grandpa”.  The show has the same “anything can happen” feel as many of Cartoon Network’s recent outings like Adventure Time and Chowder (on which Peter served as a storyboard artist), with a more unabashedly silly bent.

The character design is much cleaner than the camp-grotesque style of both Fort Awesome and the pilot episode he did as part of the Cartoonstitute. Like Chowder, the show features various animation techniques – Giant Realistic Flying Tiger is animated with paper cutouts of photos of real tigers. It skewers many kids’ show contrivances while still zealously clinging to them. Uncle Grandpa’s talking belly bag is a clear shot at Dora the Explorer’s backpack.

The show follows CN’s new 15-minute format, with each episode featuring two cartoons, a 9-minute main adventure and a two-minute backup.  The show is packed from stem to stern with crazy, with so much going on you’ll need to rewind and check on it all.