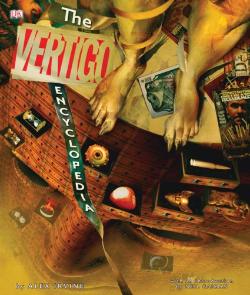 There are few ways to produce a traditional encyclopedia, usually beginning with an alphabetical listing.  Most come with illustrations and are written in an academic style with little in the way of adjectives let alone opinions.  Graphic presentation may be the key difference between one publisher and another.  The role of illustrations grew in importance largely when Microsoft introduced [[[Encarta]]].

Leave it to [[[Vertigo]]] to show how things can be done in another way entirely.  The DC Comics imprint was a natural evolution from a line of titles, largely edited by Karen Berger, in the late 1980s as writers such as Alan Moore, Jamie Delano and Grant Morrison began taking fresh looks at the occult and many of DC’s more offbeat creations.

Once the line was on its own, it quickly found its voice and thanks to DC’s design department, the covers certainly looked less like standard DC fare and more like paperback books.  The subject matter also moved away from just looking into the shadowy corners of the DC Universe but pioneered a lot of creator owned material that began in the realm of the occult but also examined super-heroes, families, and even the search for God.  The line has now become its own mini-publishing empire with comic books, original graphic novels and the just canceled Minx line of black and white digests for tweens.

DK’s [[[Vertigo Encyclopedia]]] examines the line’s output from its inception through today and as written by Alex Irvine, makes some of the tougher to comprehend titles, more easily digestible.  Irvine is an accomplished novelist and major fan of the Vertigo line and his enthusiasm surprisingly comes through on many of the entries. The writing is clear and detailed and the significant titles that deserve the most space (Sandman, Preacher, Transmetropolitan) get it complete with significant events identified.

Unlike the [[[DC Comics Encyclopedia]]] (which I cowrote), the book concerns itself with the sum total of each series from creator to collections. The book is lavishly illustrated and most every ongoing title and significant series receives at minimum a page or as many as eight pages to cover the subject.  Each section includes a listing of relevant data and most contain sidebars with tidbits about how the title was created.  We get capsules on the main characters along with a lengthy synopsis of the series.  If collections exist, they’re listed as well.  As designed though, you need to scour each entry carefully to get all the facts you might be seeking.

The back section, called the Gazetteer, provides far smaller capsules of one-shots, graphic novels and miniseries that helped make Vertigo the eclectic imprint it is, but clearly lacked the impact to merit much more space.  As a result, the encyclopedia is more a survey than an exhaustive look at the line.

If there is anything lacking, it is a comprehensive list of titles from inception through today, either by title or date to summarize the line’s growth through the years.  The book, though, is a worthy companion to the growing library of encyclopedias devoted to companies or characters.