CAPTAIN ACTION – PULP HERO!
Airship 27 Productions, one of the premier publishers in the New Pulp movement, and Captain Action Enterprises, licensors of the popular Captain Action toy line, have joined forces to produce the first ever Captain Action pulp novel, “Riddle of the Glowing Men,” by Jim Beard.  The book debuts this Aug. at Pulp Fest in Columbus, Ohio. 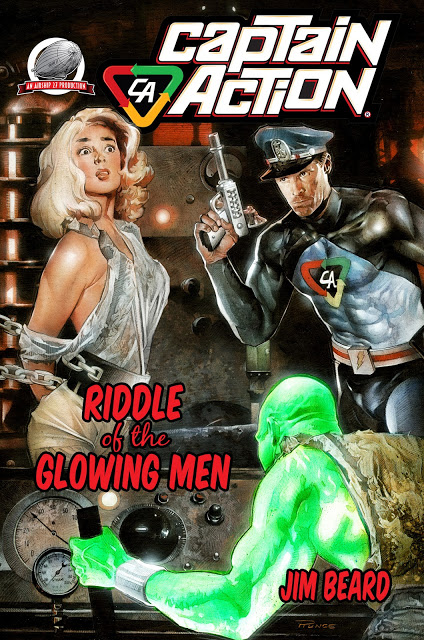 “We are tremendously excited to be working with Joe Ahearn and Ed Catto of Captain Action Enterprises,” said Airship 27 Productions’ Managing Editor, Ron Fortier.  “This is the first time we’ve ever put together a title based on a highly popular and successful license.”
Captain Action is based on the action figure created in 1966 by Stan Weston for Ideal Toys. He came equipped with a wardrobe of costumes allowing him to become many different heroes such as Batman, The Lone Ranger, the Green Hornet and many more. In 1967, Captain Action proved so popular that the line was expanded to include a sidekick, Action Boy and a blue skinned alien foe with bug eyes, the nefarious Dr. Evil.  The following year, DC Comics licensed the character from Ideal and published five issues of Captain Action featuring industry luminaries such as Jim Shooter, Wally Wood and Gil Kane.

Since 2005, Captain Action Enterprises, has been producing an array of exciting new collectibles, including statues, toys, comics, trading cards, and apparel.  Still, the one remaining venue the enduring hero had yet to conquer was that of a prose novel.  Enter veteran writer Jim Beard, a life-long fan of the character.  “Jim approached us late last year with this idea for a Captain Action pulp novel,” recalls Catto. “We were immediately intrigued by the possibilities and began seriously exploring the idea.”
It was Beard who then brought Ahearn and Catto to Airship 27 Productions.  “At the time I’d just finished my first book for Airship 27,” Beard elaborates.  “Impressed with their industry leading quality and professionalism, I knew they were the right people to usher Captain Action into the fast-paced world of pulpdom.”

The challenge of doing a licensed property appealed to Fortier and his partner and Art Director, Rob Davis and they signed on.  Their first goal was to assemble the finest art team possible. This was achieved by recruiting the talented cover painter, Nick Runge.  Runge’s work on such IDW titles as Angel & Terminator –Salvation has spotlighted him as being one of the finest new artists in the graphic field today.  Davis himself took on the task of doing the nine interior illustrations while also designing the entire package.

“Riddle of the Glowing Men,” is set in the sixties where secret agent, Miles Drake, aka, Captain Action, is attacked at A.C.T.I.O.N. headquarters by several assassins whose green skin glows as if radiated.  In the process of learning the identity of these killers and the reason behind their attack, Captain Action teams with a beautiful female Russian agent and their quest leads them to a hidden civilization under the frozen wasteland of Siberia. “Jim Beard has written a terrific, authentic Captain Action adventure,” applauds Fortier. “It perfectly captures the break-neck speed and thrills of the early pulps only with today’s modern sensibilities. This book is sure to appeal to both Captain Action fans and new pulp enthusiasts alike.”
Joe Ahearn and Ed Catto will be hosting a Captain Action panel at this year’s San Diego Comic Con with further details about other exciting plans for the classic hero.  Artist Nick Runge will also be present at his table in Artist Alley.  Fortier, Davis and Beard will be in attendance at Pulp Fest and will announce the book’s actual publication date.

About Captain Action Enterprises
As Retropreneurs, Captain Action Enterprises, LLC specializes in taking old properties and rejuvenating them for a new generation. Captain Action now appears in an on-going comic book series, lithographs, statues, action figures, T-shirts, model kits and an iPhone app. Additional properties include Lady Action, the Zeroids and Savage Beauty. For additional information, contact ed.catto@bonfireagency.com.
About Airship 27 Productions
Begun in 2004 to produce new novels and anthologies featuring classic, public domain pulp heroes of the 30s and 40s, Airship 27 Productions was one of the major factors behind the pulp renaissance which evolved into the New Pulp Movement.  Today they have over fifty titles in their ever expanding catalog, sell both hard copy and digital versions of their books and will soon be launching audio books of their titles. They can be found at airship27hangar.com