Review: ‘I Remember The Future’ 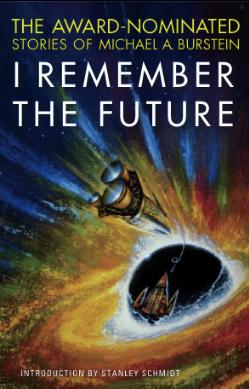 For more than a decade, writer Michael A. Burstein has been publishing tales of speculative fiction in the anthology magazine [[[Analog]]]. Several of these stories have been nominated for various Hugo and Nebula awards, including Best Short Story, Best Novella and Best Novelette. In 1999, his short story “[[[Reality Check]]]” was nominated for the Theodore Sturgeon Memorial Award. “[[[TeleAbsence]]]” won the 1995 Analytical Laboratory Award for Best Short Story and “[[[Sanctuary]]]” won the 2005 Analytical Laboratory Award for Best Novella.

These works and more have now been collected into one large volume from Apex Publishing entitled I Remember the Future: The Award-Nominated Stories of Michael A. Burstein. The book will be published on November 1, but you can pre-order at Amazon.com  if you so wish.

The stories collected here cover a wide range of topics and emotions. There’s the murder mystery involving a killer who targets students while they’re online. There’s the deeply emotional tale concerning the dying wish of the last living holocaust survivor. There is the “[[[Broken Symmetry]]]” series, a trilogy of short stories concerning the consequences that occur when a breach opens between two parallel universes and the events that grow out of it.

Even if you’ve read these works before, this collection offers you new insight into old favorites. Every single story has an afterword by Burstein as he explains what went into it and what may evolve from it in the future. He also discusses changes made in editing, such as when he presents an alternate ending to “Kaddish for the Last Survivor.”

Along with these tales are two brand new stories. There is “[[[Empty Spaces]]]”, a continuation of the aforementioned trilogy, and the titular tale “I Remember the Future”, which gives us a present tense narration from a retired writer who fears that humanity has forgotten how to truly dream.

These stories are all heartfelt and entertaining and each one appeals to a different taste and preference. If you enjoy science fiction, pick it up. If you don’t normally go for sci-fi, hey, still pick this up. These stories are, at their core, about people and the world we all deal with. And who can’t find something to enjoy about that?

Alan “Sizzler” Kistler has been recognized by mainstream media outlets such as the New York Daily News as a comic book historian, and can be seen in the “Special Features” sections of the Adventures of Aquaman and Justice League: New Frontier DVDs. His personal website can be found at: http://KistlerUniverse.com. One of these days he’d love to write for DC, Marvel or Doctor Who.