Every month, Zuda Comics, the online imprint of DC Comics, holds a competition featuring 10 different webcomics. The winner is selected based on a combination of factors including amount of votes, how often it’s been “favorited” and its overall user rating. The winning comic receives a contract to continue the series for 52 more pages on Zuda’s Web site.

For October’s competition, the Zuda editorial staff is punching out and handing the reins over to Peter and Robert Timony, creators of the Zuda comic Night Owls. In the spirit of Halloween, this month’s competitors are loaded with terrifying creatures, tantalizing mysteries and eerie landscapes. While every book doesn’t chime in on the holiday-inspired horror, each one has unique qualities that make for a month of fierce competition.

We’ve got the breakdown on all 10 of October’s Zuda books. Find out what’s good and what’s not so good, then go to Zuda to read and vote for your favorite book! 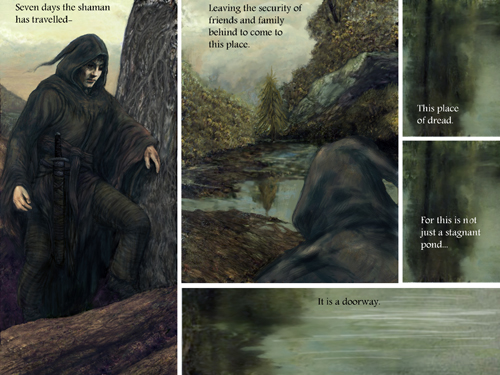 Summary: Mankind’s once endless numbers are reduced to tribes of struggling slaves persecuted by The Kangral, lizard like men of rare cunning and piercing intellect. But hope comes in the form of Carof, a man carrying with him a lineage older than civilization: the force of magic, a weapon he uses to contort reality and form doorways in which he communes with those that walk outside of time.

Furman’s Pitch: “From the strange mind of [[[Conan]]] and [[[Runequest]]] RPG artist Furman comes this experimental storybook/comic, with an art spectrum that ranges from photorealistic to impressionistic painting styles.”

Our Take: [[[Alone]]] is so beautifully painted that it’s almost sacrilegious to put on the internet rather than a hard bound book. Furman’s art is complimented by equally poetic dialogue that reads more like lyrics to a song. Though the plot isn’t fully developed in these short eight pages, it’s clear that Furman is brewing a sophisticated story that could prove epic if selected as book of the month. 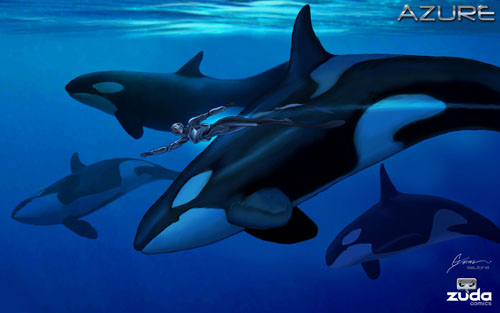 Summary: In 2022, the world is a watery grave caused by a cataclysm in 2012 known as the “Event.” Entire cities have been relocated to undersea environments to escape the wrath of the sun and the creeping of the seas. After eons of evolution moving away from the water, mankind is being forced back into her depths. Welcome to the world of [[[Azure]]].

Daniel’s Pitch: “I promise you tastefully sexy heroines, real villains, a gripping story and a wild, wild ride! My goal with this series is to make the reader feel they are there with Azure, and from the tons of feedback I’ve been getting, it’s working!”

Our Take: Sexy heroine, indeed! Daniel’s art is truly excellent filled with incredibly details and awe-inspiring oceanic landscapes. Perhaps not enough goes down in Azure‘s eight pages, which could be fixed by condensing some of the first few screens. Nonetheless, the tease of the hero’s isolation from humanity, plus the mystery of ruinous remains of an underwater city, leave the reader wanting more. 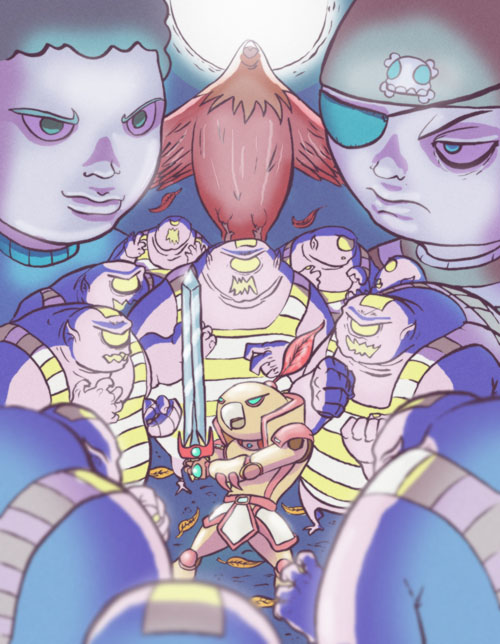 Summary: Young Javi Ramirez finds a dying, mystical bird known as the Azurius Pluma. The Azurius power becomes a part of Javi, and with it the responsibility of defeating any future evils that may appear. As a great evil prepares to destroy the [[[Azurius Pluma]]], will Javi be able to defeat whatever Rush Wolfe, master of the Gorkish Tail, throws at him? Or will the Azurius be lost in the secret history books of time?

Gabriel’s Pitch: “If you’ve ever been a fan of [[[Power Rangers]]], [[[Ultraman]]] or any other tokusatsu type shows, you’ll love Azurius Pluma!  Imagine the power of a child’s imagination infused with the power of an ancient legendary and magical armor, designed to destroy evil that no man could ever fathom!”

Our Take: An excellent pilot issue, Azurius Pluma establishes its premise and characters through subtle dialogue and gestures and less subtle action sequences. To use Gabriel’s own words, think of it as a Power Rangers concept, but in the art style of a children’s storybook. There are some translation difficulties, but that withstanding, Azurius Pluma is an “awesomesauce” adventure. 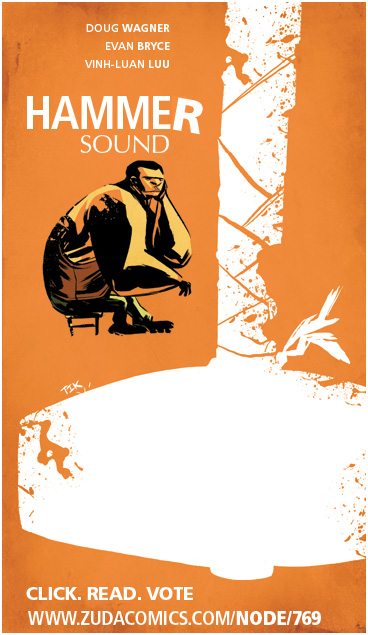 Summary: Meet Jonah Henry, a hammer-slinging man. When a six-year-old child holds the fate of the world in her DNA, only Jonah and his trusty hammer can protect her against a conspiracy to destroy humanity.

The Team’s Pitch: “What Doug and I are going for is high octane action and intrigue.  The point is packing as much energy and pure expression in each page.  When we show Jonah, we want the fans to both feel for him, and be overwhelmed by his primal strength and sheer presence! You are given small glimpses of Jonah in the first 8 pages, but if the series moves forward, you will get to see Jonah fully unleashed!”

Our Take: The concept of “Big Guy Protects Little Guy” has been done before, but when executed right, it’s an electrifying premise. Such is the case with Hammer Sound. Jonah Henry is an enormous presence that fits so awkwardly with his suit-clad enemies, but the visual dichotomy is a pleasure to behold. With a combination of excellent dialogue, characters and art, [[[Hammer Sound]]] is poised to bring the gavel down on the competition this month. 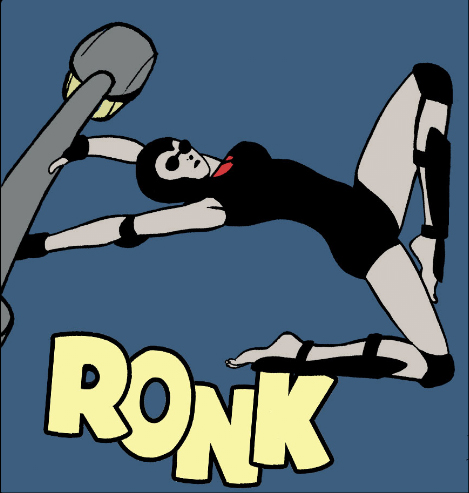 Summary: When a selfless crimefighter becomes the prime suspect in a series of brutal killings, she must struggle to clear her name in the face of evidence so damning she begins to question her own innnocence.

Paul’s Pitch: “I wrote and drew [[[Ladybug Murders]]] so fast, there wasn’t time to second-guess myself.  The result is a really peculiar snapshot of what’s going on in my head at any given time: superheroes, action, girl-on-girl action, general weirdness and, I hope, funny dialogue.  If you like good old fashioned superhero fun, and an engaging female lead who can fight crime with her feet, this is for you.”

Our Take: Ladybug Murders is a lot like [[[Batman]]], except Alfred’s a goofy younger brother and the Bat Cave is a rundown apartment. Paul Salvi writes witty dialogue and bizarre twists that evoke Brian K. Vaughn’s own banter. The mystery set up in the final pages comes a little quickly, but will likely resonate with readers as the characters continue to develop. If you’re looking for a book with equal parts crime fighting and foot fetishes, this is the one for you. 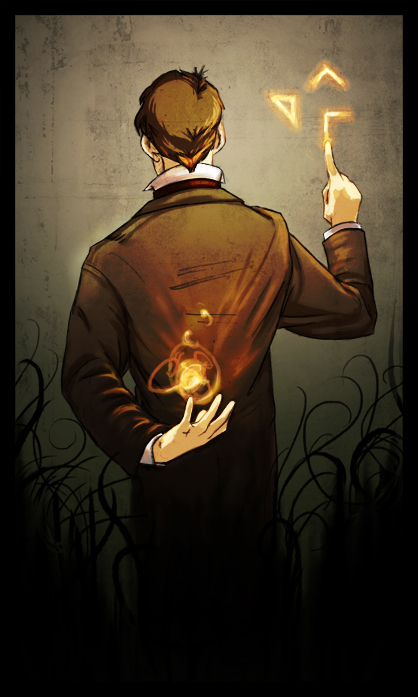 Summary: A mathematician has found a way to reach chaos and copy the skills of the ages – dreaming that everyone should have the gift of magic. Thrown into a world of incantation and rune burning, Emery Hall finds himself trying to protect the ‘[[[Mathema]]]’ discovery and his own secret of Natural Power.

Amy’s Pitch: “The surprises and range at Zuda is one of the things I enjoy about it most; the community has a really strong sense of creative freedom.  I think Mathema offers a different flavor again and I’m excited about how the story would weave itself.  I hope the readers will want to give me the opportunity to play that out.”

Our Take: Math and the Occult, two of the world’s greatest evils, combine in Mathema for a period piece filled with horror, adventure and intrigue. Amy Pearson’s art is spectacular, with a particular nod going towards her talent as a colorist. Mathema moves at the right pace, finding enough time to establish the premise and to set up the future of the series. 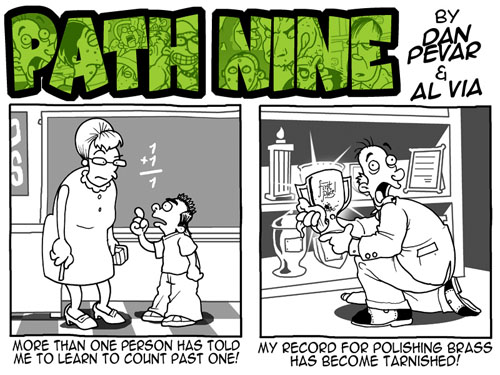 Dan’s Pitch: “Al has been making cartoons for Big Johnson t-shirts for over 15 years, and many beach goers are very familiar with his popular t-shirt designs, [and] his genuine talent carries through brilliantly in Path Nine. With your help, Path Nine will brighten up Zuda on a weekly basis in the near future, and have you laughing and groaning the whole time!”

Our Take: Via’s history as a T-shirt artist makes a lot of sense, as the cartoons seen in Path Nine would make all sorts of apparel fly off the shelves. Some of the gags take a little while to sink in, but once they do, you won’t know whether to laugh at the jokes, punch the monitor or, in most cases, both! Traditionally, cartoon strips haven’t done well at Zuda, but Path Nine is absolutely as good as any that’s come before it. 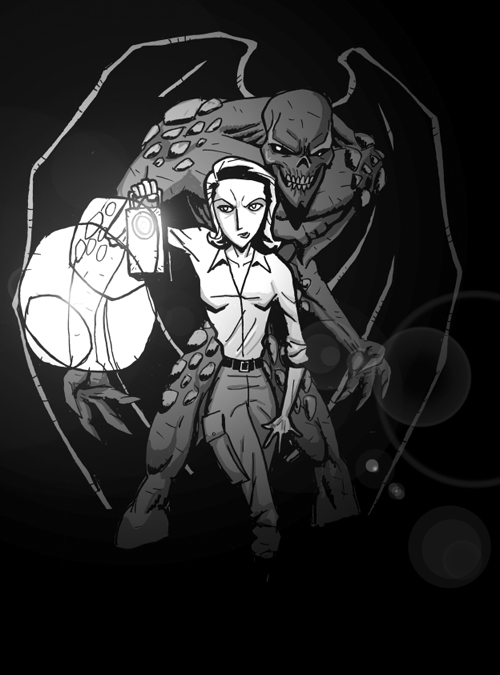 Summary: Globe-trotting reporter Victoria Valentine has a guardian angel in the form of a menacing and terrifying monster: the Skullgoyle. They are bonded by a mystical piece of jewelry connected to the disappearance of Victoria’s fiancé, Hugh Stone.

Dan’s Pitch: “[[[Skullgoyle]]] contains both classic and unique elements to combine in a fashion that provides a roller coaster pulp adventure. From the feisty femme fatale to her gruesome gargoyle guardian, Skullgoyle is poised to take an exciting globetrotting flight filled with adventure, horror, mystery, fantasy and good old fashion serial fun.”

Our Take: Skullgoyle has the feel of a solid, classic pulp adventure. Daniel Thollin’s art gives the book a nice retro style and Dan Taylor’s dialogue certainly helps on that front. While the main characters are on the sidelines for much of these eight pages, it’s clear that the team behind Skullgoyle knows where they’re taking the series. As long as we get more of the big winged guy, we’re there! 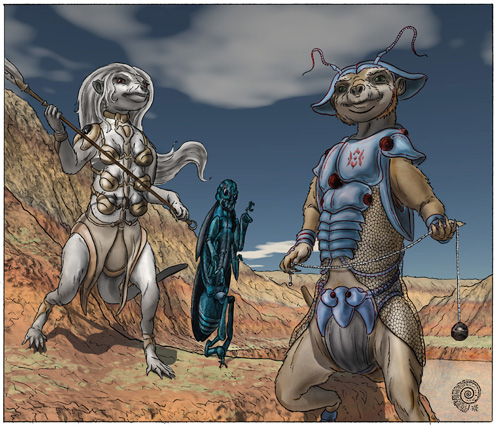 Summary: The Earth teems with life; it’s flora and fauna brimming with sapience. Even the elements are alive and aware. Pythro, a Ritualist, is one of a select few that tends to the fragile peace between all.

BW’s Pitch: “Please, I invite you to read and decide for yourself. If you like it you can vote for it.”

Our Take: BW might be a man of few words, but his comic speaks volumes. The creatures of [[[Terrestrial]]] are the most interesting character designs in October’s competition, which is a high compliment given the enormous talent at play this month at Zuda. Rich dialogue and a compelling world combine to create one of the most enjoyable web comic experiences to date.

Summary: [[[World of Chi: Chronicles]]] tells tale of the inhabitants of Chi and their struggles to find the truth of their existence.  Their conflicting beliefs in multiple gods and ideologies for the creation of Chi have made war a constant threat as each side asserts its position and deters the other from doing something cataclysmic.

The Team’s Pitch: “The gathering of slaves has begun.  Competing forces battle to resurrect their ancient God. Unimaginable chaos wreaks havoc as the planet Chi manifests itself into a sentient being.”

Our Take: Without a doubt, World of Chi: Chronicles is the most brutal book on Zuda this month. It’s full of fiery color and twisted beings, culminating in a chaotic assault on a young woman destined to save the culture of Chi. World of Chi is a very intense read and certainly not for the faint of heart, but the world that Walker, Salonen and Strange have constructed is a compelling one filled with danger, demons and despair.