The Rocket Rangers Need You!

Cubicle 7 Entertainment has released a teaser image for their upcoming game, The Rocket Rangers.

About Pathfinder Tales: Called to Darkness–
Kagur is a warrior of the Blacklions, fierce and fearless hunters in the savage Realm of the Mammoth Lords. When her clan is slaughtered by a frost giant she considered her adopted brother, honor demands that she, the last surviving Blacklion, track down her old ally and take the tribe’s revenge. Yet this is no normal betrayal, for the murderous giant has followed the whispers of a dark god down into the depths of the earth, into a primeval cavern forgotten by time. There, he will unleash forces capable of wiping all humans from the region – unless Kagur can stop him first! From acclaimed author Richard Lee Byers comes a tale of bloody revenge and subterranean wonder, set in the award-winning world of the Pathfinder Roleplaying Game. 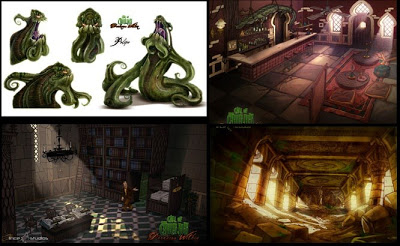 All Pulp has learned that a new CALL OF CTHULHU adventure game, called THE DARKNESS WITHIN is currently in production in Spain. A sneak peek of the art has been released. Keep watching this space for more details as they become available. 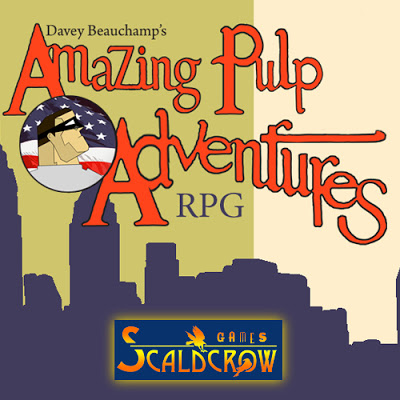 SuperPowerCast 9: “A Wide-Eyed Ambition To Dream” Davey Beauchamp Talks Amazing Pulp Adventures. For the second time this week, we sit down to look at the Amazing Pulp Adventures Kickstarter drive. This time we are joined not just by Scaldcrow Games publisher Timothy Glenn Bane but also by game creator and lead writer Davey Beauchamp. Davey discusses the origins of the settings and some of the characters and concepts we will see come to life in the game. Plus we discuss with the guys a little bit about their ideas of what makes a great pen and paper RPG!

You can listen to the podcast here or download it here. 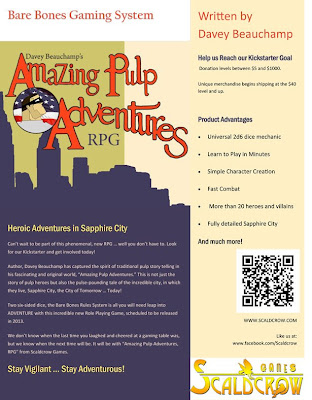 More news as it develops.

Drawing upon their rich history, Square Enix’s Dissidia 012 [duodecim] places a “Who’s Who” list of well loved characters from their “[[[Final Fantasy]]]” games into a novel setting – a combination of a role-playing game and a fighting game. Any “Final Fantasy” veteran may think about who would win in a fight between Lightning and Sephiroth, and now you can find out.

This may seem like an uneasy marriage, but it works. If you’re used to traditional fighting games like “[[[Street Fighter]]]” or “[[[Tekken]]],” this is very different. First off, combat is in three dimensions with aerial attacks as well as ground-based. Direction is automatically locked on to your opponent or power-ups. The RPG side of this pits characters in the middle of an eternal battle between Cosmos and Chaos. The focus is on combat, and you’ll have to go through different offensive & defensive techniques, as well as evasion. While the fighting engine is simple in principle, because of the high number of variables, execution can be tough. Along the way, you’ll be able to upgrade your weapons, armor, as well as swap out different attack techniques.

There’s also a “fighting only” option, but if you’re looking at this in the same frame of mind as a traditional fighting game, you’ll be slightly disappointed. You choose which character you want and match by match (no “best out of three” stuff here), you select your opponent. The opponent’s skill level is evenly matched to yours, and while this is fair, fighting games are usually not fair. There’s also no sub-boss or boss opponents, but any shortcomings Dissidia 012 [duodecim] may have as a fighting game are made up by the fact that any experience you rack up in the fighting area carries over in the RPG.

Square Enix graciously provided a free copy of this game for review. Thanks, guys.

Kudos to our friend Russ Rogers, for finding this gem of a mashup. Normally we give you guys a cool trailer mashed with another trailer. But today, we’ve got something far cooler. Take Joss Whedon’s interweb hit “Dr. Horrible’s Sing-a-long Blog” and re-imagine it as an old school top down RPG ala Dragon Warrior. What do you get? An unbelievably cool and thoughtful rendition of Whedon’s mini-masterpiece. Enjoy the bits of dialogue as text. Enjoy the storyline being shown in a new and hilarious way.

Hit start to play, or hit play to start… Enjoy!

‘Leverage’ Leaps from TNT to RPG

We here at ComicMix adore Leverage and have been eagerly awaiting tie-ins to the TNT dramatic series co-created by John Rogers. The first such product was announced this week with Margaret Weis Productions scheduled to release Leverage: The Role-Playing Game in June. The RPG will allow players to assume the roles of series regulars Nate, Elliot, Parker, Hardison, and Sophie while attempting to scheme and outwit their targets.

The Quickstart Job, a 16-page full color single scenario adventure, has been designed for June release to act as an introductory game.

The Leverage RPG will use the Cortex system as its foundation, and the 192-page, full color core rulebook will give players all the basics. The sourcebook Leverage: Grifters and Masterminds is due in September.  The 112-page full color trade paperback will include expanded rules for staging heists, planning capers, and working cons.

The second season ended over the winter and will be released on DVD May 25 while the 15-episode third season is scheduled to begin running in June.

END_OF_DOCUMENT_TOKEN_TO_BE_REPLACED

He is the voice behind the power – Josh Keaton is the lead on the SPECTACULAR SPIDER-MAN TV show and now he shares his secrets & success right here, plus a new Doctor Who RPG and will Longbox be the iTunes of online comics?

Don’t forget that you can now enjoy THE POINT 24/7. Updates on all parts of pop culture, special progarmming by some of your favorite personalities and the biggest variety of contemporary music on the net.

Webcomics You Should Be Reading: “Full Frontal Nerdity!”

I admit it. No need to twist my arm behind my back and make me cry “Uncle! Uncle! Oh Uncle, why would you twist my arm like this? What have I ever done but love you!!!”…Ahem. I admit to you I am a nerd. A dweeb. A dorkus-milorkus. I have from time to time sat at a table with nothing more than a pile of books, dice, pencils, and Mountain Dew, all to play an evenings worth of Dungeons and Dragons. I have from time to time, fired up a video game system to bring death and destruction with linked Ions Cannons. I even admit that I know that Ion Cannons are primarily used to destroy shields in the X-Wing vs. Tie-Fighter series… so saying I would use them to bring death was a false statement.   Nerdy enough? Thought so. My collective of FOMAFers… I return once again to tickle your faces, as I bring you another webcomic to toss into your web feeder gizmo-gadgets. I bring you “Full Frontal Nerdity”!

Born as a sister comic to the popular Nodwick series by Aaron Williams, Full Frontal Nerdity takes the “Gamers at a Table” concept to fruition. Updated every week, Aaron delivers a ton of yuck-yucks to those of us who have spent an evening or two under the thumb of a wicked DM. For those of you who don’t know what a DM is… you may want to wikipedia “Dungeons and Dragons”. Don’t worry, I’ll wait. Back? Good. You may have noticed that “Full Frontal Nerdity” doesn’t have an entry on said online encyclopedia… so, consider the history lesson here over. How about instead we open up the floor to the humor.

FFN places us (generally) at the table of three live (plus one webcam dude) gamers. The jokes generally stem from traditional things we nerdy-nerds tend to deal with. From the DM who invents problems and can’t out-think his players, to the players who simply swing their axe at any problem that comes to them. Aaron obviously knows his RPG jokes down pat. While certainly less accessible then some of my other picks, it didn’t take long to scour through the archives of FFN to determine I had to share it with you. There’s enough pop culture reference as well as ventures outside the gaming, that are too good to pass up. It also didn’t hurt that my fellow Unshaven Comic creator (and my roommate, and one of my best friends of 15+ years….) told me about it, and even helped pick the list of examples to share with you. What list you say?

You walk down the dimly lit corridor. You notice cobwebs flickering in the torch light, in every corner. The dungeon smells of sulfer, rotting meat, and Calvin Klein’s Obsession… And then from out of the darkness a horrible giant list of comics confronts you!!

Roll 2D20, and see if you make your will save before checking these out: