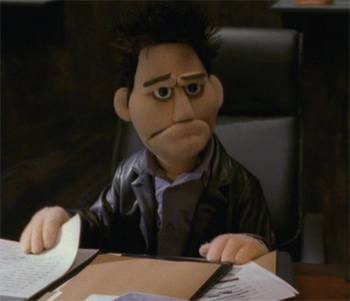 In an act that almost feels like it should have the name "Joss Whedon" attached to it, the Jim Henson Company has announced the development of a new film project called The Happytime Murders. This original film noir murder mystery will fall under the company’s Henson Alternative banner, a division that develops projects not intended for children (such as Puppet Up! and Tinseltown). From writer Todd Berger:

"In a world where humans and puppets live together (not exactly in harmony), the puppet cast of an ’80s children’s TV show called The Happytime Gang begins to get muderered one by one. It’s then up to a disgraced puppet LAPD detective turned private eye to take the case. Based on a story Dee Austin Robertson and Todd Berger, the original feature film will feature the well-known Henson style of irreverence and parody while presenting a unique twist on the film noir genre. Todd Berger (Kung Fu Panda: Secrets of the Furious Five) has penned the screenplay and Brian Henson (of Muppet fame) is attached to direct."

The plot is said to be a mix between Pulp Fiction and Avenue Q with a plethora of sex, violence, and outrageous puppet-humor. The plot may also seem a bit familiar to fans of the TV series Angel from a episode in season five titled "Smile Time" in which Angel becomes a puppet after investigating a series of murders that take place on a children’s show of the same name (not to be confused with "Happytime"). We’ll be sure to keep you updated on the film as more details develop.