Review: Two ‘Garfield’ Collections (Including One Without Garfield) 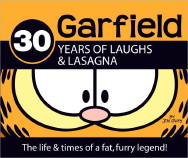 My brother was a huge Garfield fan when he was young, and my own two sons (currently ages ten and seven) have followed in his footsteps. They’re certainly not alone: as Dan Walsh writes in his foreword to [[[Garfield Minus Garfield]]], “I wanted to be just like [[[Garfield]]] – lazy, sarcastic, lasagna loving, Monday hating, cynical but under it all, a darn good guy.” There’s something about Garfield that appeal to the slob in all of us – particularly those of us who are pre-teen boys.

But most of us, I think, grow out of Garfield in time. (I could be wrong, of course – the strip runs in something like 2500 papers worldwide, so he clearly has a lot of adults reading about him every day.) We realize that there are only five or six real jokes in the strip (Garfield likes to eat, Garfield likes to sleep, Garfield hates to do just about anything else), and move on to something with a bit more depth.

Maybe I am just speaking for the coastal intellectual elite when I say that, though. And I hadn’t seriously thought about Garfield in years – if ever – so I was happy to devote some time to these two very different Garfield books when they came my way recently.

The first book was the obvious one: a volume celebrating the 30th Anniversary of the strip (which debuted June 19, 1978) with a selection of strips from every one of those thirty years and some commentary from Garfield’s creator and cartoonist, Jim Davis. It’s a fairly superficial book, without any deep insights or thoughts – but that does suit Garfield, which has never trafficked in intellectual depth.

As always, I like looking at the early, crude form of a comic that became more sleek and streamlined later on. The scruffy, more obviously fat Garfield of the first year is simply more interesting to the eye than the sleeker, more designed creature he became later – but it was much harder, clearly, to keep that first Garfield on-model. Davis mentions that he started Garfield because there were a number of “dog” strips, but none about cats – what he doesn’t mention are B. Kliban’s cat cartoons, which look to have been a strong influence on Davis’s early drawing style. He also doesn’t mention the general explosion of cat-stuff in the market after Kliban’s massively popular book [[[Cats]]] appeared in 1975; at this point Davis obviously wants Garfield to look like the beginning of the cat boom, and not merely another offshoot of it. (Kliban is safely dead these days, and won’t be raising any fuss.) Davis does allude to the possible competition, though, when he mentions, on p.72, that the original plan was to “develop him for about a year and get a good backlog of strips. …[W]e felt a certain urgency as far as the cat idea was concerned. It would have hurt if someone else came out with a cat feature before Garfield.”

Davis’s comments are few and mostly bland – Jon’s family is based on his family, Garfield isn’t based on any one cat, the huge success of the strip was a surprise – pretty much all things the reader already knew or could have guessed. It’s all pleasant, but it’s on a talking-to-fans level – Davis doesn’t get into his working routine, or materials, or anything having to do with actually creating Garfield and running the Garfield empire.

Reading a lot of Garfield strips in a row, though, left me with a new theory about its popularity: Garfield got hugely popular as it turned into an ersatz workplace strip, full of gags about coffee, hating Mondays, loving donuts, and not wanting to do any work. What [[[Dilbert]]] is to technology workers, Garfield is to receptionists and phone-sales reps and cubicle drones everywhere: an expression of the everyday annoyances of their lives, in a form suitable for posting with a pushpin on a fabric-covered wall. Garfield has the additional benefit, for those coffee-loving and Monday-hating office ladies, that it’s very unlikely to get them fired.

That’s not the only thing that Garfield is – the strips altered for the next book show a different side of the feature – but it’s the most popular version of [[[Garfield today. 30 Years of Laughs & Lasagna]]] has a lot of the pseudo-workplace strips, and a somewhat lesser showcase to the other styles: the surreal pure gags (like the dog in a superhero costume who flattens Garfield, to my mind the funniest Garfield strips, are completely unrepresented here), the slapstick (mostly involving the dumb dog Odie), and the “isn’t Jon a weenie” jokes. But it’s the ones that immediately translate to office life – the fat jokes, the food jokes, and all of the Mondays and cups of coffee that a cat would have no reason to dread and love – that have made Garfield what it is today.

I came away from 30 Years of Laughs and Laughter with a new appreciation of Jim Davis as a cartoonist – his gags are usually broad, and as old as vaudeville, but they’re drawn with an economy of line and a deft hand for facial expressions. And some of these strips – especially the random, weird gags – are actually very funny, even to this old cynic. And if Garfield helps a million office ladies named Cathie get through their days, who am I to complain?

Garfield Minus Garfield, on the other hand, is something very different. Dublin artist/IT guy Dan Walsh started it in mid-February of this year, with an initial batch of four cartoons. He carefully removed Garfield – the cat, and all traces of his existence – from strips that focused on Garfield and his owner, Jon Arbuckle. Despite what some people might say, Garfield is not a single-gag strip…it has a couple of different gags, including a number in which Garfield interacts with other characters (Odie, the cute little kitten Nermal, his girlfriend Arlene, various mice and spiders), but Walsh just used the Jon-and-Garfield strips as his source.

Stripping out Garfield from the Garfield-and-Jon strips leaves just the straight man. Jon doesn’t deliver punch lines – he is the punch line. And without Garfield to tell us what to laugh at, Garfield is just a chronicle of the life of one sad, probably bipolar man who struggles to do the smallest things. Garfield Minus Garfield struck an Internet nerve, and very quickly snowballed into a large readership.

Walsh says that wasn’t his aim, and he’s very believable. Garfield Minus Garfield feels almost like an art project, or a kind of self-therapy – an act of creating art through subtraction rather than addition, through recontextualization of what was always there rather than original work. As Walsh writes, “The funny thing is Jon has always been talking to himself. Garfield never really answers because his replies are always just thoughts.” Jon Arbuckle always was a pathetic man talking to his cat; we just didn’t notice because the cat distracted us with jokes.

Most books of webcomics are unable to add anything but portability and lack of server-lag, but Garfield Minus Garfield has more than that. First of all, the mere fact of being in an official Garfield book makes these strips more legitimate – almost as if they’re just another extension of the branding and licensing empire, bringing the Garfield trademarks to a hipper, more artsy audience. But the book also includes a foreword by Walsh, which explains how and why he started the project, and “a word” (it’s in the middle, so it’s neither a fore-word nor an after-word) by Davis, giving his blessing to the project and introducing a section of “Garfield Minus Garfield” strips that he did. (Davis’s strips are more gag-oriented and less existential than Walsh’s; he’s not changing them as thoroughly as Walsh does – and that’s just what we would expect.)

And, most importantly, Garfield Minus Garfield reprints the altered strips alongside the originals, so we can see exactly what Walsh did in each case. Most of the time, he’s just deleting Garfield and his word balloons. Sometimes, he needs to delete the word “Garfield” or other references to the cat from Jon’s speech. And, in a few strips, the changes are greater, including at least one case where he cloned an entire panel, and altered it slightly to replace an original with something completely different.

When Davis deletes Garfield, he generally chooses strips that still leave a gag behind – where Garfield was just commenting on Jon rather than interacting directly. But Walsh’s strips aren’t gags. Yes, we laugh at Jon, but that’s because he’s pitiable – we laugh because that’s better than crying. I’m not going to claim that Walsh’s strips are the comics equivalent of a Beckett play…but that’s the emotional territory that these strips are traveling. Garfield by itself can be silly-funny, and obvious-funny, and running-joke-funny (not to mention not-at-all-funny), but Garfield Minus Garfield is always sad-funny when it’s funny at all.

Tags: Andrew WheelerartComicMixcomicsreviewstripWebcomics You Should Be Reading