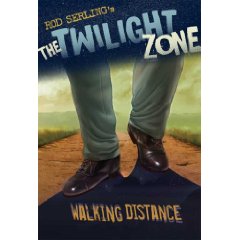 Rod Serling’s [[[Twilight Zone]]] remains one of the brightest spots of television history.  The teleplays were inventive, occasionally funny, often thrilling and always thought-provoking.  In thirty minutes, he managed to tell a story with relatable characters and situations then twist things and entertain you through surprise.

Most attempts to revisit the zone have met with mixed results.  There was the prose magazine that was quite good but the 1980s revival, not so much.  And of course, there was the cursed feature film version which was all right, but not worth losing Vic Morrow for.

The latest people to visit are the students at the Savannah College of Art & Design.  The faculty there has licensed from the estate of famed TV writer Rod Serling the rights to adapt the original scripts.  The school then partnered with Walker & Co. to release eight graphic novels between now and 2009.  The first four are currently out,, adapted by Mark Kneece, who has written for DC Comics and elsewhere.  The art, lettering and coloring are handled by the student body, one team per book.

They wisely led off with “[[[Walking Distance]]]”, the most personal of Serling’s scripts, inspired by growing up in Binghamton, NY. A man mysteriously finds himself transported back to the days of his childhood and he seeks out his younger self to warn him of the perils of being an office drone.  Things happen and lessons are learned.

The second release is “[[[The After Hours]]]” as a woman’s visit to a department store reveals things about herself that were forgotten and changes her worldview.

Both books do a fine job taking the teleplays and fitting them into the 72-page format.  There’s plenty of time to develop characters, no need for rushing or building to climaxes allowing for commercial breaks. Instead, the characters breathe which is nice.

It’s the art and color where things don’t work as well as they should.  Starting with the covers, the designs are nice but the execution leaves something to be desired and honestly don’t compel you to pick up the books. Perhaps the familiar TZ log should have been used to help.

Dove McHargue’s art in “Walking Distance” is fine and serviceable but lacks attention to detail with minimalist backgrounds, when the backgrounds help ground you in the feeling of being in another time and place.  His body language is also a little stiff and the subtle emotions aren’t always obvious.

In “The After Hours” Rebekah Isaacs does a far better job with emotionally aspect but a far worse job with the backgrounds, a minimalist approach that does not work.  Also, the balloon placements were badly placed, crowding the art unnecessarily. She does a nice job with the color, though.

The Twilight Zone was shot in black and white and often the lack of color worked to help establish mood and atmosphere.  Both books come up short on this and there’s a general lack of subtlety to the work while the series often excelled at that.

It’s hard to say if there’s an audience for $10 adaptations of a show still aired on cable and available on DVD.  Still, Walker is aiming this at younger readers and if they use this as a gateway to Serling’s other works, then it’s worthwhile.