Goofy is Back With a New Animated Short 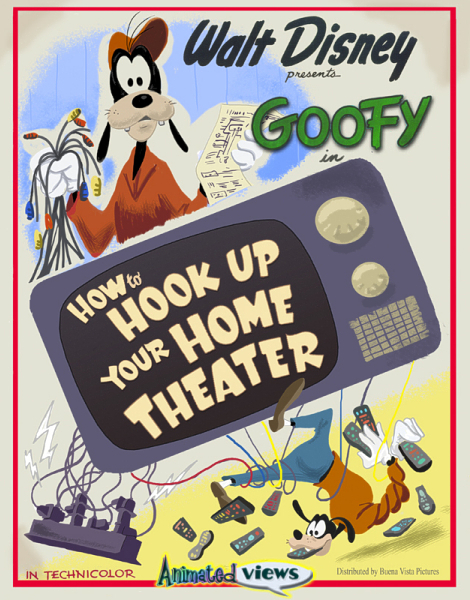 In his first theatrical appearance in nearly 50 years, Disney has brought back Goofy for an all new animated short. Much like others in the "How To" series (such as How to Ride a Horse, How to Play Football, and The Art of Skiing), Goofy learns how to hook up a home theater in How to Hook Up Your Home Theater, released in theaters last Christmas.

Directed and co-written by Kevin Deters in his debut, the short was also voiced by Disney veterens Corey Burton and Bill Farmer with music by Michael Giacchino (Lost, The Incredibles). There are lots of nods to previous Disney favorites and it will bring you back to the last Goofy short you saw in theaters in Aquamania in 1961.

The short was partially produced using a new "paperless" production pipeline for Disney, the first major change in production technique for hand-drawn animation at Disney since the introduction of CAPS, and was also an attempt to see if the new digital animation tools could be used to produce a short with the same graphic look as that of a 1940s cartoon.

It was attached to last year’s National Treasure 2, and was also released with the DVD. As mentioned, this is the first theatrical release of a classic Disney character in years. Enjoy as Goofy goes through the same troubles that many of us go through when trying to buy and/or install our brand new, state of the art, home theater set up.

Check out the video below, thanks to our friends at JoBlo, or you can purchase the video for multiple viewings through iTunes for $1.99. Enjoy!