Review: ‘Gus and His Gang’ by Chris Blain 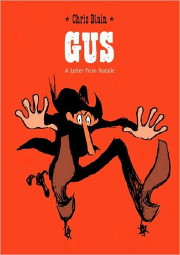 There must be some reason why the good Western comics – hell, pretty much all of the Western comics – of the past three decades have all come from France, but I don’t know it myself. France never had a West of its own; never had a frontier on its border to expand into. (Rather the opposite, actually – their big neighbor is Germany, which spent several hundred years trying to expand into them.) But there’s a streak of Western comics – about the American West, of course – from France going back through the “Blueberry” stories by Charlier and Moebius up to this book.

Well, whatever the reason, the French like stories about our Old West at least as much as we do, and now here’s another one: [[[Gus and His Gang]]], a collection of stories originally published between 2004 and 2007 about three outlaws and the women they pursue (and are pursued by). Gus, Clem and Gratt do rob banks and hijack trains – that’s how they make their living – but those things are mostly incidentals in these stories. These guys are much more concerned with getting a leg over – money never seems to be a problem (there’s always another bank to knock over), but sex always is.

Gus is the title character, the guy on the cover, and the ostensible leader of the three-man gang, but he has the worst luck with women of the three. The first story, “Natalie,” sets the tone – a woman from his past (he knew her five years before, in Cincinnati, when he was working in a wild west show) comes back into his life, and he chases around after her – as she leads him on by his exceptionally long nose – but doesn’t get anything out of it.

Things keep going wrong for Gus – he leads his gang to the fabled city of El Dorado, in the story of the same name, in search of women. (This El Dorado isn’t Latin American, and isn’t made of gold, but it is legendary: all of the women there are said to be single, and, as it turns out, much friendlier than one would expect for their historical period.) Clem is married, so he says he’ll sit out the fun – but actually falls in with a gorgeous photographer, Isabella.  Gus and Gratt follow Gus’s pseudo-player rules, which work quite well for Gratt, but not at all for Gus. (Again, they do a little robbery along the way to El Dorado, but actually being outlaws isn’t what these stories are about.)

As the book goes on, Clem looks more and more like the real main character, especially after the gang breaks up.  There’s a major story about Gratt, “Linda McCormick” – which sees the three outlaws suddenly and unexpectedly having settled down as lawmen – and some bits about Gus, but the book is more and more about Clem (and about Isabella, and about Clem’s wife Ava and daughter Jamie) as it goes along.

That’s natural, since Clem has the most story connected to him: Gus is the sad sack, for whom nothing goes right, so he’s good for comedy stories. And Gratt is the still innocent young man, more seduced than seducing, but that only goes so far. Clem is a rounded adult, with responsibilities and ties – who nevertheless spends most of his time surrounded by tough men and easy women, giving him lots of scope for temptation. (The fact that he gives in to temptation so much may because his creator is French, because he’s an outlaw…or maybe, just because he’s that kind of man.)

So the second half of Gus and His Gang is mostly about Clem: how he deals with caring about both Ava and Isabella, how he can move up or on from his current life – he aspires to be an urban “handsome outlaw” in San Francisco – and even about his and Ava’s past. It’s not the way anyone would have expected Gus and His Gang to go – the stories keep a similar tone and style, but do become more serious, and their events have more consequences.

I wasn’t expecting much from [[[Gus and His Gang]]] – a book in a minor genre, from a cartoonist I wasn’t familiar with – but it’s full of life and energy, with dynamic cartoony characters that stop just short of the rubber-hose school. And, for a book that’s all about women, Blain has the useful ability to draw many women who are not only attractive, and not only differently attractive, but who are attractive in keeping with the time period. (There’s one wonderful sequence, early on, where Gus follows a woman around a town after glimpsing her shapely ankle, and wondering what her face looks like.) This one is a real find, though I suspect men may enjoy it more than women. (Some of the women in it – notably Ava and Isabella – more than hold their own with the boys, but this is essentially a book about men and their women, not about both men and women.)