Review: ‘The Good Neighbors, Book One: Kin’ by Holly Black and Ted Naifeh 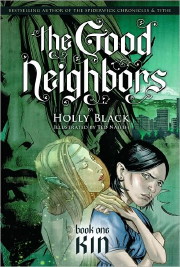 Holly Black is a major writer for young people – one-half of the team behind the phenomenally popular “[[[Spiderwick Chronicles]]]” (along with Tony DiTerlizzi) and the author of three dark contemporary-fantasy novels for teens, starting with Tithe. Getting her to write a graphic novel series for teens is of the same magnitude as the long-underwear companies signing up bestsellers like Brad Meltzer and Jodi Picoult.

But the difference here is that Black is working for Scholastic, one of the oldest and smartest publishers of books for younger readers around. Scholastic, unlike DC with Picoult, didn’t try to shoehorn Black into some already-existing corporate property, but worked to her strengths. [[[The Good Neighbors]]] is an original graphic novel series set in the modern world, mixing teen drama with an otherworld of nasty folkloric faeries – faeries along the same lines as those in Black’s novels for teens. Scholastic also paired Black with Ted Naifeh, a well-known cartoonist and illustrator in his own right, whose most popular works have a Goth flavor and likely are loved by the same kids who read Black’s books.

This is how it’s done: you get a good writer, let her work on something she knows and does well, pair her with a complimentary artist, and package it for the audience that already knows and loves both of the creators – note that this is a $16.99 hardcover, a price point similar to teen novels and comics collections. (Are you listening, DC?)

[[[Good Neighbors]]] is the story of Rue Silver, who thinks that’s she’s an ordinary teenage girl – not even overly disaffected or downtrodden. But her mother has been missing for three weeks, her father is acting weird, and she’s starting to see things. And then her college-professor father is arrested – a student of his was found murdered, and the police suspect he killed his wife as well. Rue gets her friends to help investigate: she knows her mother isn’t dead (even if Rue doesn’t know where she is) – but she’s less sure about the dead student, so they start poking around to see what they can find.

Eventually, Rue learns that she’s not quite who she thought she was, that her mother had to go away because of something her father did, and that she has a whole side of her family that no one could have expected. She’s also going to be caught up in a whole tangle of new problems and concerns, but those can wait for the next book. This one ends well, closing out this particular story while opening up the world and the series for many more stories.

The Good Neighbors is similar in plot and setting to Black’s teen novels, but it’s less dark-themed and dangerous than those books are. There are faeries here, and they’re not to be trifled with, but they’re not as seductively, horribly deadly as they were in [[[Tithe]]] and [[[Valiant]]] and [[[Ironside]]]. Good Neighbors feels like it’s been pitched right in between Black’s previous work: a bit older and more serious than “Spiderwick,” but not as gloomy and angsty as the faerie novels. There’s no official age guidance on this book, but I’d expect it’s fine for nearly all kids twelve and up, and many ten- and eleven-year-olds. And there’s no reason for adults to avoid it, unless they dislike stories about teenagers: Rue may be young, but she’s neither dumb nor annoying about her youth.

Naifeh’s art is a just a bit ugly – his faces are blocky and pained, the humans as horrible in their own way as the faeries, and backgrounds are usually implied rather than fully rendered, a wall here or some ivy there. It’s all solid and yet a bit fey, slightly otherworldly in just the right ways.

The Good Neighbors looks to be a great series for the hordes of young readers who love stories of dangerous, seductive figures sneaking into lives very much like their own – I expect readers of Stephanie Meyer and Laurell K. Hamilton alike will enjoy this tale of Rue Silver and her [[[Kin]]].