Who’ll Be the Next ‘Batman’ Villain? 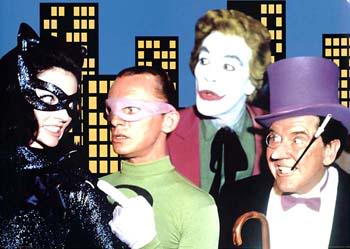 It appears the villains of The Dark Knight, the latest installment in the Batman movie franchise, won’t return, as Aaron Eckhart’s Harvey Dent appears to be killed off and Heath Ledger’s untimely death makes it impossible for him to return his version of the Joker.

So, the obvious question becomes "who’s next?"

One blogger at Doomkopf thinks we may have already seen him:

…actor Joshua Harto plays Mr. Reese in “The Dark Knight,” an employee for Wayne Enterprises who comes to the conclusion that Batman is actually Bruce Wayne. Oh, and, it’s not like I’m spoiling anything; everybody and their dog has seen this movie already. He eventually gets targeted by the Joker before he can share his secret, after which he’s summarily pushed out of the movie after Bruce Wayne saves his life and gives him one hell of an evil eye. It’s either a loose end that never got tied up, or it’s a sign that he’ll be back in future movies.

Now, isn’t that kind of like Edward Nigma’s origin? Ex-employee to Wayne Enterprises, grown bitter, and seeking revenge against his former employer? And, ditching the lame “enigma” joke would be a step in the right direction, though another clue presents itself when you think about it for a second. His name in this movie is Mr. Reese. Mysteries. I’d say I might be on to something.

However, a viral marketing campaign for Dark Knight might indicate the people behind the film were making much-less subtle hints to the Riddler’s whereabouts, as Edward Nashton (an alias of the Riddler) "wrote" a letter to the editor at the Gotham Times Web site.