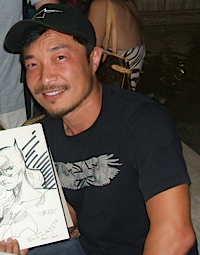 When Entertainment Weekly assembles seven of the most powerful men (and woman) in all of comics, obviously some massive news bombs are going to get dropped.

“Yes, I read comic books in the bath,” Grant Morrison announced, shocking the assembled fans and setting the blogosphere ablaze.

Okay, so there was little in the way of truly newsworthy information disseminated by the esteemed panel of Jim Lee, John Cassaday, Matt Fraction, Mike Mignola, Robert Kirkman, Colleen Doran, and Grant Morrison. However, there’s something immensely satisfying about sharing an hour of time with some of the most creative individuals in the comic book world (and frankly, beyond). It’s the kind of panel that reminds a guy why he reads comics in the first place, because these guys work their hardest and embody the philosophy John Cassaday put forth, “There’ll be limitations in whatever you do, so you might as well go for it.”

A topic that is nearly omnipresent at this year’s ‘Con, the specter of the film industry looming large over the conference, was addressed by the panel, with many attendees asking questions about the increasingly symbiotic relationship between film and comics.

“I see a lot of storytelling techniques in TV being effected by comics,” Lee commented, pointing out that the comic book has become so successful that mainstream has no choice but to adapt some of its devices. However, not everyone on the panel was as excited by the increasingly close relationship between comics and movies,

“I see people applying film rules to comic book visuals, let’s do the comic and then let someone else do the film,” Mike Mignola said, keenly aware of the difference between comics and film. Human quote machine Grant Morrison added, “Hollywood is more formulaic, comics allow you to break those rules.”

All of the panelists expressed some dread at the lure of comic to film adaptations limiting the ambitions of up-and-coming creators. However they all reasserted that this is a life they pursued not for money, but because its the only calling they ever felt, “I really can’t imagine doing anything else… everyone up here ha a compulsion,” Colleen Doran said.

Following the theme of creative expression, Jim Lee and newly minted partner at Image Comics Robert Kirkman were asked how that will effect their craft, “Once you’ve done all that stuff, it’s kind of hard to just go back to a table and just sit there drawing,” Lee said. Adding that there’s a liberation that comes with his executive status. As for Kirkman, “So far, it’s just making a few extra phone calls.”