Marc Alan Fishman: Jump In, Let’s Save the World 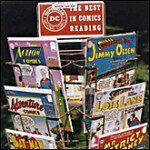 Erik Larsen, of Image Comics fame, said on his Facebook wall (and I’m paraphrasing and ignoring some of his sluttier words…) “Every comic is a jumping on point. Why are you so scared?”

Those words hit me like a brick house. As many of you know, I write a weekly review of a single comic book over at MichaelDavisWorld . The cool part (aside from Michael Davis calling me “his fourteenth favorite cracker just behind the Ritz”), is that with this new mantra instilled in me it was as if a veil had been pulled from before my eyes.

As many of you read last week, the era of collectability is all but dead. With that logic, combined with Larsen’s standard flapping in the wind… I decided that for the next good-long-while, I would review issues I’d never read before; ones that caught my eye for no personal reason like a love a particular character. While it’s not been a perfect plan that’s opened me up to worlds I feel like I’ve been missing all my life, it has given me plenty of new perspective. But I digress.

Larsen’s point makes sense when you apply it to other media. You see, this is how I tackled my initial fear. I didn’t start watching (and loving) The Cosby Show, Dr. Quinn: Medicine Woman, or even Batman: The Animated Series from their very beginnings. I’ve certainly stumbled into movies playing on cable a quarter, a third, or hell, three-fifths into their running time, and saw them to their conclusion – and later got myself caught up. My first CD was Aerosmith’s 12th studio album. Guess what? I didn’t immediately run out and purchase 1 through 11. I bought their greatest hits album. Zing!

As I noted last week, prior to the Image renaissance of the early 90s my generation didn’t have “jump on points” clearly labeled on the covers of our favorite comics. You want to like the X-Men? Good, go get Uncanny #197 and dive in. Think Superman might be your speed? Action Comics #643 is right there for the taking. Enjoy! One simply couldn’t wait for the volume to end, reboot, or reset. I’d abstained from the monthly comics throughout high school, for the very fear Erik rails against. “How could I possibly enjoy Detective Comics #546 without knowing what happened 20 issues ago?” Hence, I purchased trade paperbacks instead. It didn’t take long of course to note that they were in fact collections of pre-existing issues. Tada!

A single comic book, yes, even Watchmen #11, is small slice of entertainment. A solid fifteen minutes tops, if you’re a slow reader or Brian Michael Bendis is doing dialogue. And if a comic is written well, and drawn well, you know it regardless of subtext. Hence, if you jumped into any comic off the shelf and it was worth its salt, you could catch up and have a new series to enjoy. If the comic doesn’t work for you, then a few bucks are wasted, and you have some glossy toilet paper next time you head to White Castle.

My hunch is that the whole “death of the collectible comic” stems from this ideology of having to be there from the beginning. Hell, let’s be honest, kiddos. When a book starts to get hot it’s fast-tracked to tradesville and then your local comics shop makes it all-too-easy to get in before it’s too late. I know for a fact I would never have followed Irredeemable, Y: The Last Man, or the current Hawkeye had it not been for that fast-track-treatment.

The rush-to-trade happens, I largely assume, when the printed single issues are selling fast enough to warrant the collection. The rub here of course is that for every big publisher able to push things like that to the racks, there’s tons more being left at the station because it’s not exactly a great business move to dump a ton of trades on a store that isn’t selling out dozens of copies of The Atheist.

Much like Community is beloved by critics and a group of rabid fans but doesn’t garner the ratings like Friends, at the end of the day the argument is moot: a #1 excites the fans to buy more than #2, 3, or 237. But that’s been discussed. What Erik suggests, and I concur, is simple: Go buy that #2, 3, or 18. If the cover looked cool, buy it. When you flip through it on the rack and you chuckle a bit at the dialogue, buy it. If your friend at the gym told you he’s been on the book for months now, and says you’d love it, buy it.

You don’t know until you try. You’re smart enough to connect the dots, even when they’re scattered. Our industry doesn’t always need to slam on the reset button in order to get you back into the fracas. Take the leap. You might actually stumble across something that really puts the pep in your step.

I mean seriously… what are you… scared?