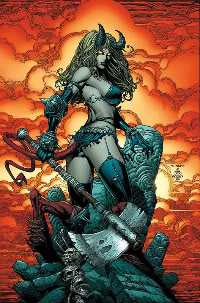 The big announcement out of Marvel’s X-Men panel at Comic-Con was the news that Infernus will be the next big X event, starting in December. It apparently has ties to Inferno, a previous crossover.

Newsarama talked to C.B. Cebulski about the event:

Newsarama: First off CB, does Inferno II have anything to do with the events in Divided We Stand Book 2 and Illyana Rasputin’s return as Darkchilde?

CB Cebulski: Yes, the Darkchilde story in Divided We Stand 2 was direct set up for this story. And for those that missed it, it will be reprinted in the new Return of Magic one-shot coming out in September!

NRAMA: How does Infernus relate to the first event–nearly 20 years ago? Comic book time is weird…

CBC: And Limbo time is even weirder. You’ll just have to read to find out.