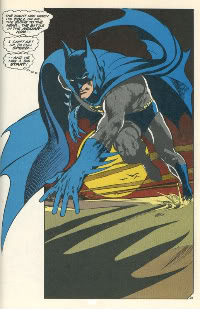 You know superheroes are dominating Hollywood when the movie trade Variety features an extended ode to Neal Adams.

The piece, which includes some quotes from Adams, stresses his role in bringing about more serious superhero comics, particularly on Batman, and how that has influenced superhero movies.

Major studios have mounted a corporate takeover of Comic-Con as a vehicle to promote movies and TV shows, but comicbook artists still receive rock star treatment at the San Diego event. And among those artists, none cast a larger shadow over the current cinematic renaissance than Neal Adams.

Teaming with writer Denny O’Neil in 1970, Adams transformed Batman from the "Biff! Bam! Pow!" camp associated with the 1960s TV show starring Adam West back into the sleek, brooding Dark Knight depicted onscreen for the past two decades. By doing so, they helped establish the serious-minded template that has informed the best superhero adaptations that followed.

And the best quote from Adams:

As rendered by Adams, Batman again became a night-shrouded creature and less a superhero than a grim vigilante — Sherlock Holmes with Olympic-quality athleticism. "Batman is the grittiest character in all of comics," Adams said. "This is an awfully real concept, so none of this wishy-washy shit would do."