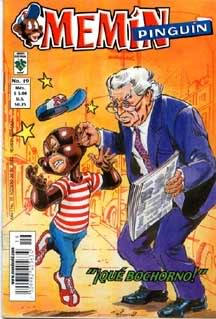 Back in 2005, the Mexican government heard quite a bit of outcry when the country’s popular comic book character, Memin Pinguin, was commemorated on stamps.

It was a controversial decision because, as many see it, Memin is a racist stereotype of dark-skinned people. Look at the image at right and decide for yourself.

Now Memin is back in the news, as some reprints of the comic book series have turned up in Texas Wal-Marts. And a few shoppers are none-too-pleased.

She found one passage particularly offensive. In the frame, Memin Pinguin is being kicked by a light-skinned man and is called “a black troublemaker.”

Activist Quanell X said the problem with the book is more than just words.

“This is poking fun at the physical features or an entire people. Making them look buffoonish (and) portraying the young (black) kid as stupid,” said Quanell. “Whenever they are beating him, they are referring to him as Negro. Even here when he is being punched, slapped (he is called) Negro.

“This is a disgrace.”

You can find a bit more background right here, including some evidence that the book isn’t racist.