Things looked dour headed into the comics shop this week, but several books came out of left field and left me impressed. Rare that happens anymore when books get chewed over ad nauseum before they even hit shelves.

So let’s celebrate this special little week, when the comics followed in the tradition of the grand U.S. of A. and liberated themselves from suckiness. 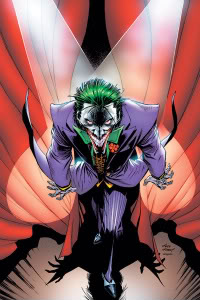 Book of the Week: Joker’s Asylum #1

— When it comes to the Joker, there are a few staple stories. And probably the most generic is Joker taking over a giant game show and threatening the kidnapped contestants with death.

So when this book — which comes across like a clear cash-in on the upcoming Dark Knight film — started off with that premise, I could only think, "Not again." That obvious bent is all set up, though, and writer Arvid Nelson swings the story in a direction that’s not only surprising, it’s also genuinely subversive.

The Joker’s target is the "innocent," just not the contestants. He spares them (despite their idiocy), instead taking aim at a malevolent producer and the audience at home.

For anyone who bemoans the fact that thoughtful quiz shows are being swiftly pushed out of prominence by the like of Deal or No Deal, this is a story you’ll love. Alex Sanchez also offers a very new art style that’s scrawling but effective.

And the climactic line is a doozy: "Who’s the real sicko, America?" Indeed.

and Station #1 — Two new series from Boom! Studios, and both really shine. Station is a horror story set on an international space station, but at least so far there are no monsters or science fiction. The sizzle is all of the interpersonal type, as regional differences burn like a solar flare and one astronaut ends up killed.

High Rollers, from mystery writer Gary Phillips, is a Sopranos-like look at the rise of an L.A. crime lord. While the art in the first issue is too clean for the source material, Phillips keeps the story humming along as his antihero CQ starts to see the ugly side of a life in crime.

— After the disappointing dragging-on-forever conclusion to Joss Whedon’s run, I was all set to give up on this book, especially after learning it would be part of the listless X-Men’s current continuity. Then I started reading it. Credit Warren Ellis with taking this book back to the characters, focusing skillfully on their relationships and putting together a great comic, even though nothing much really happens.

I’m still not sure about Simone Bianchi’s take on the art, though I love how experimental he’s being with design. And if the words, "Chaparanga, where alien spaceships go to die," doesn’t make you excited for next issue, I don’t think we can be friends.

— Maybe it’s my patriotic side shining through, but it’s nice to see Hellboy back in the States. And though this mini feels like a pretty minor story so far, it’s got all the requisite cool elements, with witches and demons and hillbillies galore. While Richard Corben’s art is fine, he’s not using any of the layout quirks like mini panels that have long been a staple of Hellboy.

— It’s hard to get too excited here, as the book’s canceled and the conclusion to the storyline reads like the fastest rug-sweeping job ever. Too bad. Rick Remender had put together a handful of very good issues.

Shazam #1 — While I would say this is more "written down" than Jeff Smith’s Shazam series, it’s a better than average Johnny DC book. The highlight is the art, which has a childish verve and is either done on notebook paper or made to appear that way. It’s a cool touch.

Blue Beetle #28 — Another one-and-done as the new creative team gets ready to take on Jaime’s adventures. It’s a decent enough story, with plenty of nice character moments, but it’s pretty campy (Dr. Mephistopheles???) and too many plot points are forced. To wit: Jaime and pals come aware of a villain in town by reading message boards? That’s just a lame stab at being contemporary. 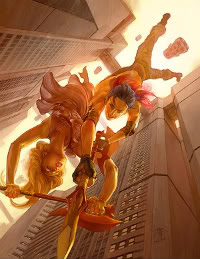 — This issue is supposedly a pretty big deal, and not just because Joss Whedon’s back. Since I have no background on Buffy, I don’t really understand the implications of this hop into the future. I do like how he utilizes the scope comics offer over TV, including the unlucky Dawn becoming a centaur.

House of Mystery #3 — The mystery of house of mystery is explored a little more, with the new resident realizing (again and again) that escape is not an option. It’s esoteric, but with so much focus put on the humanity of the residents it works. The story with the story is decent, but I really hate how they put credits for it on the pages, disrupting the flow of the book and putting a hiccup in the suspension of disbelief.

Jonah Hex #33 — Way too much text at the beginning of the story, but that quiets down as the action heats up. It’s one of the best issues of late, as Hex saves a freezing boy from wolves, then ends up in a fight against corrupt Canadian mounties. How awesome is that? And the "moral" of the story, that Hex refuses to take the boy in, is a defining moment even for a character who’s had tons of them.

Astonishing Wolf-Man #7 — Does it seem like a coincidence to anyone else that Robert Kirkman puts a big game-changing moment in issue seven of this series? While it’s fun to see Zechariah go unhinged, this book reads like Invincible with werewolves and vampires. I’ll have to say this is my last issue.

— I was hoping for an issue that explored the effects on average people of the shape-shifting Skrulls invasion, which seems like a perfect place to use some Body Snatchers-style tension. Instead, there’s a whole lot of not much happening, then some New Yorkers running in the street that’s straight out of Cloverfield

or any other big blockbuster. Yawn.

Boys #20 — Not a bad issue, as we’re past the halfway point of hearing the secret history of Vought and the superheroes. It’s interesting stuff, but presented like a lecture, so it gets lugubrious to wade through. But using the 9/11 attacks to sell a dramatic point in a comic? Unnecessary and borderline offensive.

— You might think I have a vendetta against Grant Morrison, as Final Crisis took this spot last week. No, I just hate nonsensical stories that mask weak writing with chaos. I literally have no idea what the hell happened in this issue. No idea. It seems to be trying to be told from the point of view of a drugged-up Bruce Wayne (who then thinks he’s the Batman from Zur-en-arrh), but even the supposedly lucid points are as clear as tinted glass smeared over with Crisco.