Marvel Gets Smart, by Dennis O’Neil 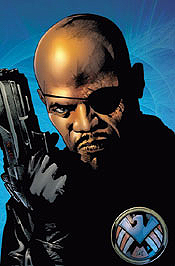 As I begin to type this, on a rainy Sunday afternoon, there are only 211 days left before someone else lives at 1600 Pennsylvania Avenue, near the Potomac. I tell you this, not because it has anything to do with what follows, but to perhaps lend a note of cheer to your hour.

I didn’t stay through all of the Iron Man flick’s end credits, but I should have because my friend Ken Pisani told me that Samuel L. Jackson has a brief scene in which, in the persona of Nick Fury, he reveals to Robert Downey’s Tony Stark that he represents an organization called, in acronym-crazed Sixties fashion, S.H.I.E.L.D. Dissected, that meant Supreme Headquarters International Espionage Law Enforcement Division when the organization first appeared in 1965. It was later changed to stand for Strategic Hazard Intervention Espionage Logistics Directorate, which was probably more au courant, but is no less a mouthful.

It is a nifty coincidence, but no more than a coincidence, that S.H.I.E.L.D. makes a big screen appearance at about the time as another espionage-themed entertainment with roots in the spy-mad decade of peace and love, Get Smart, gets into the malls.

It is not a coincidence that the current tv promos for another popcorn movie, The Incredible Hulk, tells us that Marvel has done it again, thus making a solid connection between theaters and comic shops. So, we don’t go to the multiplex to see a superhero movie, we go to see a Marvel superhero movie. This is called “branding” and it means, as I understand it, the identification of a group of products as a single, collective entity. You, fashionista that you are, don’t buy a suit, you buy a Brooks Brothers suit because the Brooks Brothers label guarantees a certain level of quality and a certain approach to the creation of clothing. (And aren’t you a bit young to be dressing so conservatively?)

Pop culture history is repeating itself.

I doubt that Stan Lee ever used the word “branding” when he was creating Marvel Comics – I doubt that the concept had even been labeled, back then. But that’s what he was doing: branding. Marvels were different: irreverent, slangy, with a big emphasis on visuals, especially action scenes. The heroes weren’t standard, goody-two-shoes paragons of the Eisenhower years (though they never did anything really ignoble) and they had personalities, sometimes rough-edged ones. The editorial approach was self-satirical, cheeky, almost modernist. And crossovers became something akin to policy. Sure, the appearance of a character in another character’s title was not particularly new, but it had never been done so often, and had never so obviously been intended to establish a consistent fictional reality. Stan once told me that he wanted everything in the Marvel line to support everything else.

He was pretty much making it up as he went along. That’s surely not true of the guys running Marvel Entertainment, who are filling screens with big bucks derring-do. We know about branding now; you can look it up. And it’s a strategy partially proven in the pages of those yellowing and brittle funny books before any of us even heard of branding, or imagined that we’d see a twenty-foot tall Iron Man.