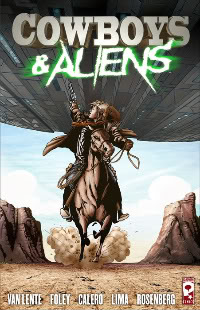 Robert Downey Jr. must have enjoyed his foray into comic book films as Tony Stark in the breakaway success of Iron Man. According to The Hollywood Reporter, Downey is in talks to star in another long-in-development comics property, Cowboys & Aliens.

While the armor-clad Marvel Studios’ film rises above the $500 million mark in ticket sales, Downey is looking at the Western/sci fi mashup from the Platinum Studios comic by Fred Van Lente and Andrew Foley. The property now is at Dreamworks/Universal after bouncing around the studio circuit for about a decade, but now is supposedly set for a 2010 date.

The story centers on an Old West battle between the Apache and Western settlers, including a former Union Army gunslinger named Zeke Jackson (Downey), that is interrupted by a spaceship crashing into the prairie near Silver City, Ariz.

The story draws a parallel between the American imperialist drive to conquer the "savage" Indians with its advanced technology and the aliens’ assault on Earthlings, who must join together to survive the invaders’ attack. …

The most recent draft by "Iron Man" and "Children of Men" writers Hawk Ostby and Mark Fergus clearly hit the right notes, as the project looks to gain its major players quickly.

No word on how this affects plans for the planned Iron Man sequel. As you’ve read here at ComicMix, that one is supposedly set for May 2010, which would mean a crowded plate for Downey.