The Writes Of Spring, by Dennis O’Neil 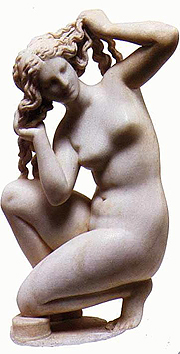 As I sit down to write this, I’m less than five hours from midnight on March 23rd and so it might be appropriate to wish you a Happy Easter, or Happy Pasha if you’re an Oriental Christian, or Happy Purim. Or maybe I should give a shout-out to Aphrodite, Ashtoreth, Astarté, Demeter, Hathor, Ishtar, Kali, Ostara – all deities who were celebrated around the spring equinox and, as far as my extremely limited and unreliable knowledge goes, all of whom were connected to fertility, which figures: Spring equinox = end of winter = new life = let’s have a party.

Or…let’s let one stand for all and just celebrate the goddess whose name gives the holiday it’s name: No less an authority than The Venerable Bede, an early Christian scholar, wrote that Easter was named after the Saxon goddess Eostre, and if you can’t trust the Venerable Bede, well…

I like Easter, and tomorrow I may do something celebratory, even if it’s only to walk in the park down the road. (Yeah, us old guys really know how to tear it loose.) It’s a real holiday, as evidenced by all the ways it’s been celebrated over the millennia – see the goddess list above – and I think that means that it acknowledges and celebrates something deep in our collective culture, our life on this planet, probably our genomes. The catalogue of such holidays is short: there’s the various festivals of light that occur around the winter solstice – Merry Christmas, all – and around the fall equinox that generally involve harvests and eating, and Easter, et. al. All happen at seasonal changes and all involve the Basics: birth, death, light, dark, and survival.

You don’t have to believe in the literal truth of a mythology to accept the realities that underlie it.

The other holidays? Random hoopla, mostly: hoorays for dates on which some important event just happened to fall – Cinco de Mayo, the Fourth of July, Washington’s birthday, my birthday…Nice enough excuses for a party, maybe, but not really significant or meaningful except to small, private groups. If we didn’t have them, we’d never know they were missing. I don’t think that’s true of the real holidays.

About now, you might be wondering if any of this has anything to do with popular culture in general and/or comics in particular – topics which, after all, are the good ol’ raison d’etre for this weekly blather. Well, okay, lemme see…We’ve been discussing Easter, which is about things coming back to life, no? So let me lay a few names of you: Superman, Jason Todd. Captain America, Ras Al Ghul, Mister Spock…See the connection?

Hey, every mythology is tailored to a specific time and place. The ancient Greeks had their Demeter, we’ve got our Superman.

I’m kidding. Or maybe not.

Late postscript: This is last week’s piece. Crankus, the malevolent god of technology, sabotaged both the column’s transmission and my follow-up post to Mike Gold asking if he received it. For all I know, Crankus is, at this moment, about his dirty tasks.

And while I’m blathering…the premiere of Mike Uslan’s documentary on comic book legends happens Saturday, 1 PM at the Asbury Park film Festival in Asbury Park, N.J. Bruce Springsteen is not expected, but there will be a panel discussion after the flick.

Who knew that Asbury Park had a film festival?

RECOMMENDED READING: The Woman’s Encyclopedia of Myths and Secrets, by Barbara G. Walker.

Dennis O’Neil is an award-winning editor and writer of Batman, The Question, Iron Man, Green Lantern, Green Arrow, and The Shadow – among many others – as well as many novels, stories and articles. The Question: Zen and Violence, reprinting the first six issues of his classic series with artist Denys Cowan, is on sale right now, the second volume, Poisoned Ground, will be on sale April 30, and his novelization of The Dark Knight will be available this summer, and you can pre-order them now.