The opening weekend results for Marvel’s The Incredible Hulk pretty closely mirrored my experience catching the film on Friday afternoon: The theater wasn’t packed, but everyone had a good time. 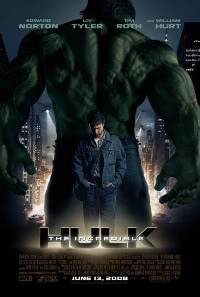 According to USA Today, the new Hulk came through with $54.5 million for its first weekend take, which is actually less than Ang Lee’s Hulk took in the opening weekend in 2003 ($62 million). And while critics didn’t especially love the new take on the green goliath (Rotten Tomatoes gives it approval from 64 percent of reviewers), fans seemed to dig the Louis Letterier-Edward Norton combo.

CinemaScore notes the new Hulk earned a very solid A- from viewers, which bodes well for continued success. The 2003 version brought in almost nothing after the first week on the way to becoming a massive flop.

The showing I caught was between half and two-thirds full, and for the most part the audience seemed completely sucked into the movie. The only complaint came after the semi-endless credits when no extra features rolled. For what it’s worth, I enjoyed the flick.

This was also a pretty competitive weekend for movies. According to USA Today ticket sales increased from the same weekend last year, and a string of movies did well. Kung Fu Panda

took second with $34.3 million, M. Night Shyamalan’s The Happening took third with $30.5 million and a couple others were above $13 million.