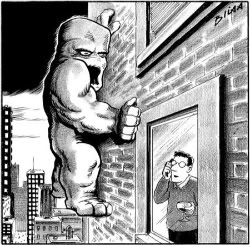 You’ve likely heard a bit about a recent cartoon in the New Yorker’s cartoon caption contest (seen at right) that was a pretty direct ripoff of an old Jack Kirby cover. The New York Post, among others, called it plagiarism.

This doesn’t delve too much into that debate, but Patrick House, the man who won that caption contest, gives an explainer at Slate.com about the formula he used to win, and what it says about the New Yorker.

His winning caption, by the way, was: "O.K. I’m at the window. To the right? Your right or my right?"

He also touched on the differences between this cartoon and the Kirby original:

And what better archetype of urban ennui could there be than a man in a cardigan holding a drink, yapping on his cell phone while blissfully unaware of looming dangers? A very similar cartoon by Jack Kirby from 1962 — similar enough to lead the New York Post to shout plagiarism — has the person inside the window frightened and cowering, sans drink, glasses, or phone. But that was 50 years ago, and drudge and complacency have settled on the urban landscape sometime between now and then. You must look for these themes in your cartoon and pounce.