Indiana Jones and the Godless Commies, by Dennis O’Neil 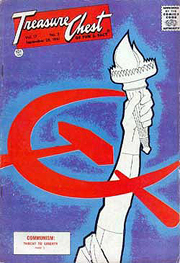 I liked the new Indy flick better than the critics I read, all of whom said something like, well, okay, it was all right but not up to the earlier entries in the series. Which makes me wonder: what would they have thought if this had been the first Indy flick, instead of the fourth. It’s like those clichés in Hamlet – they weren’t clichés to the greasy-chinned groundlings at the first (or fourteenth, or eighty-third) performance of Shakespeare’s story of a screwed-up kid with severe mama issues. Way back in 1981, Steven Spielberg, George Lucas, and a platoon of talented collaborators took elements from Saturday afternoon serials, silent comedies and maybe a few other sources and combined them in the right proportions to create entertainment that was not only right for the time, but provided a template for a lot of entertainment that followed.

Was the fourth as good as the first (or second, or third?)? That’s me, scratching my head and muttering, I dunno…And, frankly my dear, I don’t give a damn.

Years and years ago, a brilliant science fiction writer told me that Goethe’s criterion for judging art was found in two questions. To wit: What was the artist trying to do and did he succeed in doing it? I’ve never found a good reason to argue with Herr Goethe and by his criteria; Indiana Jones and the Kingdom of the Crystal Skull is a success. We entered the multiplex hoping to be amused, hoping to forget Bush’s ongoing follies and the Democrat’s internecine dogfights and – voila! We were amused and we, temporarily, forgot. Value received. Money well spent.

Two things briefly distracted me (and here we insert a Spoiler Warning): Indy survives a nuclear blast by taking refuge in a refrigerator that is tumbled for a great distance – a mile or more? If I hadn’t been in a Pontiac that turned over three times on the Pennsy Pike some time back (according to witnesses; I wasn’t counting) and then spent days in a hospital intensive care ward while my insides calmed themselves, my willing suspension of disbelief might not have been so sorely tested by Professor Jones’s bouncing ice box.

That was quibble one. Quibble two has to do with making the communists – or dirty commies, as we called them in my childhood – the bad guys, as the Nazis were the heavies in Indy’s debut. Oh, make no mistake, I’m aware that the international communist movement has a lot to answer for, particularly as practiced by Stalin and his ilk. But before it got derailed, communism’s goals were social equality and the end of tyranny, and those are not objectives of villains. Not all commies were blackhearts and maybe that should have been noted somewhere in the screenplay. (Or course, not all Nazis were blackhearts, either, and dammit, life is never as simple as melodrama…)

Before I dissolve into hysterics, let us proceed to this week’s –

RECOMMENDED READING: The Science of Superman, by Mark Wolverton.

Dennis O’Neil is an award-winning editor and writer of Batman, The Question, Iron Man, Green Lantern, Green Arrow, and The Shadow – among many others – as well as many novels, stories and articles. The Question: Poisoned Ground, reprinting the second six issues of his classic series with artists Denys Cowan and Rick Magyar, is on sale right now, and his novelization of The Dark Knight will be available in a couple weeks.