First things first, a rant. This was a banner week for comics (and don’t those always fall after a holiday, postponing releases ’til Thursday?), but I have a pretty substantial bone to pick. This week’s comics were rife with price-gouging from both DC and Marvel, with pointless cost hikes on several issues. The only semi-understandable $3.99 tag came with Final Crisis

, which I reviewed on its own right here.

Now, rant aside, the reviews… 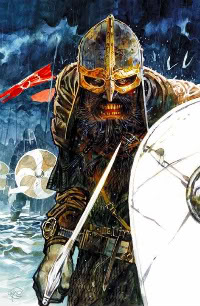 Book of the Week: Northlanders #6

#6 — Brian Wood’s series of Scandinavian mayhem has been hit and miss, but this issue’s on target like a broadsword to the brain. Sven continues to kill as many of Gorm’s allies as he can, brought to life with gloriously gory art.

But the key to this issue is how it’s gradually pulling Sven away from his mindless pursuit of revenge, even if it happens with a way too convenient to plot development.

It’s the story of a leader’s birth, but instead of being told through the rosy view of history and legend, it’s an ugly, bitter and brutal story. It could yet turn into a truly great series, as long as it doesn’t stray too far into the trite territory of Braveheart

— J. Michael Straczynski is doing so many things right in this book that it’s impossible to single any one of them out as central to the series’ success. Moving the plot in a new direction, he has Loki playing the Asgardian angles for the umpteenth time, only it’s so sly and written so well that it feels completely fresh, and not just because Loki’s now a woman.

The best moments come from the odd and awkward interactions between the Asgardians and the real world, which is now their world: an awkward love connection between god and mortal and the priceless image of two gods stuck in a small town jail after they had a too-public rumble with some monsters.

— The origin of Hal Jordan as Green Lantern continues, and it’s the same balance of good and bad. On the one hand, Geoff Johns is covering ground that’s been covered too many times already, with Jordan getting his ring and starting training on Oa.

As boring as those moments are, the hidden part of the origin, the shadowy "Darkest Night" prophecy, continues to be endlessly interesting. It draws in so many unexplored pieces of Jordan’s and Sinestro’s backgrounds that it’s a shame Johns decides to waste time on the known aspects.

— A very close miss from this standalone issue. We get a seemingly random sidetrack with Toyman, as he kidnaps Jimmy Olsen to write his true story (there’s a great little joke as to why he picked Jimmy). And, surprisingly enough, Toyman’s tale is an illuminating moment that adds a big new wrinkle to his character in a believable way. It’s a well done villain story, and a creative framing device to bring Cat back to Metropolis.

— Greg Rucka joins Ed Brubaker on a new arc, as Matt Murdock is still reeling from essentially losing his wife to Mr. Fear. Punching his pal Luke Cage? Bad decision. After so many glum issues, the creative team finally starts to pull Matt out of the muck, giving him a quite mysterious court case to dive into. We’ll see if this is the first step in a new direction that’s so desperately needed.

Blue Beetle #27 — Here’s another thing to be impressed with by this book: Even with guest creators, it continues to be among DC’s best. Will Pfeiffer steps in this time for a quick little battle between Jaime, his gal pal, Traci 13, and some mysterious demons. It’s funny and rolicking throughout, and has the added emotional heft of showing Jaime that there’s a limit to his newfound powers.

Fire Breather #1 — Image’s new Fire Breather stories are pretty much a direct parallel to Invincible, except the teenage hero here is half dragon, not half alien. Even the art is firmly in the spare, brightly colored tone of Robert Kirkman’s book. There are a few good moments, but nothing especially noteworthy.

Zombie Tales #1 — If you’re one of those people who still think zombies are cool, you’ll enjoy this collection of stories from Boom! Studios. If not, you won’t. Simple as that. 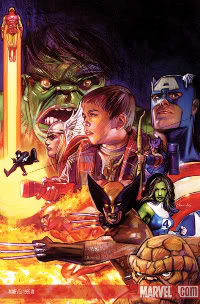 Marvel 1985 #1 — Time for me to bitch about prices. This book costs $3.99 for no obviously apparent reason, unless we’ve risen Mark Millar to deity status. Really, the story is nothing more than a rehash of Last Action Hero

, except with Marvel characters. It seems written for a 1985 audience and comes across as tacky and silly today. Still, it’s worth reading if only for Tommy Lee Edwards’ art, which is borderline jaw-dropping. Too bad you have to pay extra for the "variant" edition with his cover (at right).

story has started out as a random, rambling mess. All of a sudden Batman’s closest companions think he’s turning schizophrenic, though it hasn’t been set up. And this bunch of goofy villains suddenly cripples the whole Batman operation? It’s still too early to write this off, but things look bleak.

Batman: After Midnight #1 — I love, love, love Kelley Jones’ artistic take on Batman, with all the exaggerated angles and harsh contrasts. Too bad it’s paired with an utterly uninspired story from Steve Niles, who seems to have no understanding of Batman’s character. I’m sorry, but no way the Dark Knight whines to Gordon about cops taking his credit for busting criminals.

— We get yet another perspective on the battle between heroes and Skrull hero impostors in the Savage Land, and it’s getting more boring with each iteration. Secret Invasion is moving along, but it’s walking like a crab, ever sideways. At least we finally found out what the Skrulls were doing at that secret base, which was built up forever and ever: They were mining vibranium. Wait, that’s what all that build up was for?

Perhapanauts #2 — I really want to like this series, but good grief was this issue slow. The big cliffhanger from last time around is resolved with a snap, and then it’s gab fest from there on out. Just because the characters are weird doesn’t mean I’m okay with them not doing anything.

The Astounding Wolf-Man #6 — I decided to give this series a try, but it didn’t take. The story was fine, though it drifted clear into cheesiness, but the art is a childish mess.

— I saved the worst for last. A freaking year late wrapping up Joss Whedon’s X-Men story, Marvel has the audacity to not only rename the thing and give it new numbering (drawing in those first-issue cultists), but also to jack the price all the way to $4.99. $4.99! And why? For a cover gallery of the covers that I already have because I bought all the other issues of this series years ago?

Instead of working hard to develop new readers, Marvel is pulling this kind of gimmick to squeeze as much blood as they can from current readers. Mostly, I’m just mad at myself for buying the dang thing. And, worst of all, the resolution to the story isn’t any good, and not just because it’s so late.