A small rectangular box, wrapped in brown paper and stamped "Super Spy," appeared in my mail box over the weekend. I opened it to find an Arturo Fuente cigar box.

Inside that, no cigars, but instead a weird little collection of items put together from Top Shelf to celebrate the Eisner Award nominations of two of its books, Matt Kindt’s Super Spy and Jeff Lemire’s Ghost Stories. 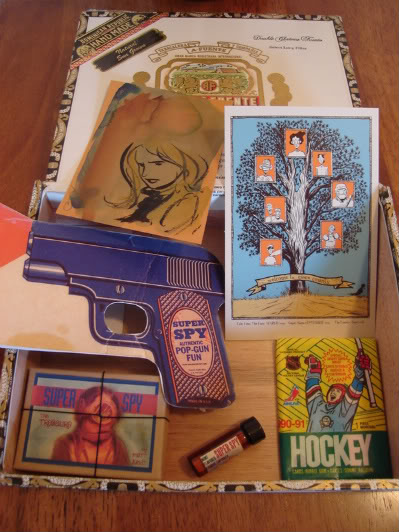 There’s a paper gun, a piece of original art signed by Kindt, some "cyanide" tablets, a pictorial treasure hunt, a pack of 1991 hockey cards (gum included) and an Essex County postcard.

What it reminded me of most are the packages sent out by college football teams to promote their players for the Heisman and other awards. The only problem with Top Shelf’s effort is that comics journalists don’t vote on the Eisners. Still, it’s pretty cool stuff.