Simply put, a huge week in comics, with a full load of books even before we get into Skrullapalooza 2008. Though a few decent indies came out, superheroes dominated the shelves, and Marvel’s superheroes especially, including a couple of big debuts. 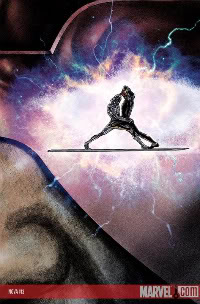 Book of the Week: Nova #13 — A comic has to be pretty dang good to overcome a cover like the one at right, which seems to show Nova and Silver Surfer en flagrante as Galactus serves as an interstellar peeping tom.

Despite that, Dan Abnett and Andy Lanning’s space book shows no Annihilation

hangover, keeping the pedal all the way to the floor. Back to trying to serve as a cop of the cosmos, Nova responds to a world being destroyed by Galactus. In a great catch, Nova realizes the world is already doomed, so he focuses instead on the rescue mission (with nice allusions to FEMA and Hurricane Katrina).

As if that wasn’t enough, the writing crew throws in the complicating villain Harrow, a malevolent and vague force that feeds off suffering — a clever parallel to Galactus’ appetite.

No kidding, this is one of the best superhero comics right now, and easily the most enjoyable space story in recent years.

The Boys #18 — The comic known for its raunchiness is as bellicose as ever, with a constant peppering of cursing that almost makes Deadwood

seem prim and proper. While that’s what the series has come to be known for, this issue surprises in how well it captures interactions among the characters in low-key ways.

Of course, there’s also a lengthy scene of a floating corpse peeing all over…

The All-New Atom #23 — Escalating craziness is the proper description for this series. Ryan is now in some sort of alternate universe, where his friends (thought to have been eaten by last issue’s monster) are fending off bizarre monsters. A classic bad-to-worse issue, with lively art from Pat Olliffe and another great cliffhanger ending.

— The conclusion to Brian K. Vaughan’s take on Wolverine, which is delicately written while not delicate. The ghosts of Logan’s past are finally extinguished, and his penchant for survival reaches a new level. Still, it seems a bit anticlimactic, which may owe entirely to high expectations.

Abe Sapien: The Drowning #4 — Hellboy’s pal continues the dark journey into his own past, with some of the darkest writing yet from Mike Mignola. A story where not much happens, but a lot happens. It succeeds largely because of Jason Alexander’s art, which is stunningly haunting.

— One of Marvel’s big debuts, this book is obviously meant to serve as a transition point for fans of the movie to become fans of the comic. It mostly works in bridging that gap, though it does strain to keep a toe in each world. There are a few minor problems with Matt Fraction’s script: the beginning narration from Tony Stark has serious tense issues and the character of Ezekiel Stane, while frightening, is annoyingly inconsistent.

— Only a year or so late, DC ships the conclusion to the Geoff Johns-Richard Donner Superman story. Amazingly, it largely overcomes that weakness thanks to a massive issue that’s essentially one epic battle, rendered with cinematic skill by Adam Kubert. 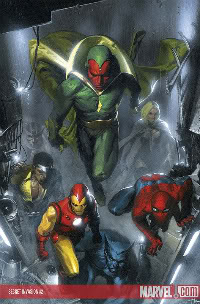 — Yes, that’s right, Marvel’s big event book didn’t crack the best of the week. This Skrull invasion has been built up as something of a thriller, with lots of mystery and subterfuge, but this issue drops all that for a couple bombastic fights that don’t quite succeed. I wonder if Brian Michael Bendis is trying to be too different from the plodding House of M

— I’m always glad to see Mike Allred’s creation on the shelf, but I continue to wonder where he’s headed with the character. At the end of the first arc, he essentially hit "reset." But this issue is just another traipse through Madman’s thoughts. Time for something to actually happen.

X-Factor: The Quick and the Dead #1 — Over the past few years, Quicksilver has been one of the most despicable characters in comics, from House of M to his bludgeoning of Layla Miller. In this lively redemption song, Peter David brings the speedster back to relevance, if not to his old heroic ways. A great read, especially for X-Factor fans.

— Paul Dini finally pulls back the curtain on the new Ventriloquist, and it’s a finely done reveal for a femme fatale. If only it could’ve been told without the typical villain exposition. Still, a fun issue that benefits from the frenetic art of Dustin Nguyen.

Omega the Unknown #8 — Perhaps the weakest issue of this series to date. It’s still a fun, head-scratching romp, but the plot doesn’t advance much and the sing-song history of the last Omega doesn’t quite work.

— As a very dire threat against the slayers is revealed, Buffy and team go back and forth between jokey and serious, a balance that Joss Whedon can manage but hasn’t quite accomplished here. That said, there are a handful of great moments. Just remember, never trust a vampire.

— The manga-fication of Batman continues, with a cool take on Bruce Wayne’s ninja training, a deft insertion of Japanese myth and the mysterious use of dreams as weapons. It’s worth teaching yourself how to read backward.

— This heroes out of time story is a fine but unnecessary tale, just the latest in a long line of Alex Ross projects that hark back to earlier incarnations. It’s not a bad read, but its attempts at tying to current continuity are strained. It would be nice to see Ross take on a more original story.

The Foundation #5 — The premise of a covert group secretly trying to prevent the disasters predicted by Nostradamus is a great setup, but the conclusion of this series is far too mundane. It reads like espionage Mad Libs, which means its perfectly fine, but it could have been much more.

Nightwing #144 — There’s a great scene in this issue of Nightwing taking out some bad guys on a train, almost a superhero "slice of life" that’s worth studying for its layout. That aside, the issue wanders between three disparate stories, offering little hints but never pulling a focus together.

Rann/Thanagar: Holy War #1 — DC’s outer space is a muddled place right now, and the first issue of this series does nothing to straighten it out, or in explaining why the umpteenth fight between Rann and Thanagar is relevant. Also, the surprise villain would be more surprising if he didn’t look like a stereotypical alien villain.