‘Farscape’ Comics on the Way 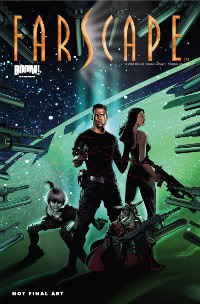 In the past few months, BOOM! Studios has had a spate of comics picked up for movie adaptations, but now that flow of comics-to-screen is reversing course. The publisher just announced a deal with the Jim Henson Company to create multiple four-issue series adapted from the sci fi TV show Farscape

The show ran for four seasons before an abrupt cancellation, and the new comics look to expand on the untold parts of the story, according to the press release sent over from BOOM. The creative team hasn’t been announced, and the art at right is preliminary.

"Farscape took science fiction television to a new level and ushered in a whole host of shows that wouldn’t have been possible without Farscape‘s pioneering. As a long-time ‘Scaper’, I am incredibly excited to mine the dense universe of Farscape for new stories and adventures in comic book form," said BOOM! Marketing and Sales Director, Chip Mosher. "I watched the show as it came out, I bought the DVDs the day they hit the shelves, and I can’t frelling wait to publish these comics!"

The Farscape comic book series will be taking advantage of the upcoming webisodes to be produced by The Jim Henson Company in association with RHI Entertainment for SCIFI.COM. The webisode series will re-unite Farscape executive producer Brian Henson with creator Rockne S. O’Bannon.