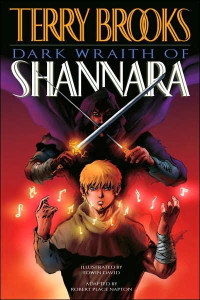 I am morally sure that the following conversation took place somewhere, among some people, before this book came into existence:

“It’s not fair! All of those other fantasy writers are getting comics based on their books!”

“Yeah! Why Salvatore and Hamilton but not Brooks?”

“What do they have that he hasn’t got? He’s at least as popular as Feist!”

I have no idea who said it, or who they said it to, but, somehow, the influence of the Dabel Brothers has led to ever more epic fantasy writers getting the urge (or maybe just the contract) to create graphic novels based on their work.

Not that there’s anything wrong with that; American comics have been a closed guys-in-tights shop for a generation now, and anything that opens that up is nice. But it is a bit weird, personally, when the two sides of my world collide quite so violently.

Dark Wraith of Shannara, unlike most of the recent epic fantasy comics out there, doesn’t adapt anything; it’s a brand-new story set in Terry Brooks’s very famous (and very bestselling) world of Shannara. For continuity geeks – and aren’t we all that, about something? – this takes place soon after the end of the novel The Wishsong of Shannara

, and involves much of the cast of that book. Wishsong is the third of the original Shannara “trilogy:” they’re nothing like a trilogy, despite being three books about members of the same family published relatively quickly and all having the word “Shannara” in the title, but fantasy fans will call any conglomeration of three books a trilogy if you don’t stop them with heavy armament.

I have to admit, here, that I haven’t read Wishsong (I missed a chunk of Shannara books in the middle), so I’ll be somewhat fuzzy on what went before. I’m sure that, if I say anything terribly wrong, someone will be along to correct me in the comments.

Anyway, as Dark Wraith begins, peace has once again been restored to the world, after the destruction of the horrible Ildatch – a book that wanted to conquer the world! (In fact, the opening pages of Dark Wraith contain an unintentionally hilarious account of our hero Jair Ohmsford battling evil to destroy the last sentient, mobile page of that book.) Along the way, he learns that his magic, the Wishsong, can bodily transform him into the dead Weaponsmaster Garet Jax – which is handy, since Jair’s own combat skills would not have been enough to keep him alive.

Such transformations are dangerous, for reasons Brooks doesn’t fully explain. Jair’s sister Brin walks through the narrative long enough to thoroughly warn him against doing it again, and to extract a promise that he won’t.

But – and wouldn’t you know it? – Jair is almost immediately contacted by the ghost of the silliest-named wizard in all fictional universes, Allanon, and told that only he can defeat the evil plots of the reptilian Mwellrets and their new ally, the hideous Croton Witch. To do that, he’ll probably need to use the Wishsong.

(By this point, I hope you’ve realized that there are things that Terry Brooks does well – 50 million Elvis fans can’t be wrong, and all that – but character names is not one of them. Any book with both a robed guy named Allanon and a Croton Witch is hard to take seriously.)

Jair does the usual epic fantasy thing – gathers old allies, goes on a dangerous journey to save his friends, and confronts the evil forces as they’re about to accomplish their master plan. (In this case, that’s calling back the castle of the Druids from another world, so they can crack the books, pull some all-nighters, and eventually study their way to world domination.)

I probably shouldn’t give away the ending, but…this is set in between previously published Shannara novels, so fans of the series will know whether the world was overrun by Mwellrets or not. And, at the critical moment, Jair either holds firm to his vow never to use the Wishsong again and succeeds despite that handicap…or needs to use it and has no serious repercussions from that. The book ends with an extensive “making of” section and a chapter from [[[Wishsong]]].

The art is decent, a slightly manga-tinged (especially around the noses and ears) version of standard modern American mainstream heroic. The line art is buried under piles of tone, though, as if the publishers couldn’t afford to go to full color but weren’t willing to commit to actual black-and-white, either.

Dark Wraith of Shannara, as an inserted middle of a long-running series, is really of primary interest to people who are already fans of the series. No prior knowledge of Shannara is required to read this, but I can’t see very many people choosing this, out of all of the graphic novels available, unless they’re already Brooks fans. On the other hand, Brooks has a lot of fans, so that’s no small audience.