This week has all the makings, as an underdog wins book of the week honors, Marvel tries its darndest to rev up Skrullfest ’08 and Atlanta traffic finally almost kills me. Without further ado, the reviews… 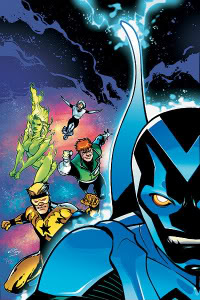 Book of the Week: Blue Beetle #25 — When this first series first started up, I loved the concept but found it too hit-or-miss to pick up on a regular basis. After reading this latest issue, I can firmly say that not only has writer John Rogers found his stride, he’s turned this book into one of DC’s best.

In the conclusion to an epic whole-world-at-stake storyline, Jaime finally comes into his own as a hero, using a whole lot of trickeration and stick-to-it-ive-ness to defeat the bad aliens. Rogers uses those evil aliens (who are in a way the scarab’s source) to effectively entrench Jaime as the definitive Blue Beetle – no small feat.

It’s a perfectly executed balancing act between superhero fun and tense action, with plenty of credit owed to Rafael Albuquerque’s art. The two hilarious intrusions by Guy Gardner and Booster Gold put this book over the top.

— Of the three books that crammed the upcoming Secret Invasion down my throat, only this one had any effect. Brian Michael Bendis combines the expected handful of brilliant personal exchanges with an intense fight between a mysteriously super-powered Skrull and Echo and Wolverine. Ultimately, it’s a tense and foreboding book, although I’m still on the fence about the big event.

— This book is so consistently entertaining and touching that it’s like clockwork. Now, if only it was like clockwork regarding the release schedule… That aside, the story of Superman’s impending demise continues and (maybe?) concludes in this issue, which essentially serves as an elegy to his glorious life. Beyond the affecting contemplations on mortality, what Grant Morrison does especially well here is capture the sense of round-the-clock heroism of Superman’s life.

Mighty Avengers #11 — It’s hard to believe this book’s also being written by Bendis, as it doesn’t work in all the ways that the latest New Avengers does. The Mighty team continue a big, seemingly pointless battle with Dr. Doom. Maybe there’s a point, but not much effort is made for relevance. And the hint at Skrullery is so minor it’s already forgotten.

— Skrull onslaught part three: In this jumbo-sized issue, I really liked the integration of the old Skrull story, which continues to back up the rumors that this event’s roots will reach back three or more decades. What I didn’t care for was the modern portion of the story, as there are two Ms. Marvels, one supposedly real, one supposedly Skrull. The big problem is that, as of yet, I still haven’t been given a reason to care about this character.

Green Lantern #29 — It’s impossible not to enjoy a Hal Jordan origin story by Geoff Johns and Ivan Reis, but for as good as it is, there’s nothing much new to that chunk of the narrative. What’s really interesting is the never-before-seen telling of Abin Sur’s full background. But it’s strangely only given a few pages at the very end of the issue. Maybe next issue.

Transhuman #1 — Jonathan Hickman has become something of a comics darling of late after his The Nightly News approached comics in a very new way, with an extremely digital brand of art. This is his latest new series, and it succeeds only in revealing the limitations to that artistic style. In short, this issue is nothing but a collection of talking heads, so stiff and lifeless that I don’t even know if it can accurately be called a comic book.

Black Panther #35 — After a whole lot of cosmic mumbo jumbo, T’Challa returns to earth and finds trouble brewing in Wakanda. Aside from the forced shoe-horning in of black characters (which Hudlin acknowledges in a bit of meta-script), it’s pretty decent superhero fare. Two things bother me, though: If you’re going to bring back a stupid character like Killmonger, shouldn’t you at least update him a little? And with BP flying solo and Storm back to the X-Men, how long till we’re all pretending that marriage never took place?

Daredevil #106 — I read this while stuck in traffic on the way home. A decent read, as Ben Urich, Foggy and Dakota lament Matt’s predictable swandive into self-loathing and destructiveness. It did make me realize a problem with the series: Dating back to Bendis’ run, pretty much every story has been about deconstructing Matt, making him miserable. It seemed like Ed Brubaker was poised to take another tack, but so far he hasn’t. Well, Matt’s as low as he can go. It’s time to see something new in DD.

The Spirit #15 — I’d say it’s officially time to call an end to The Spirit relaunch. This book was fun but completely innocuous, a story as unchallenging and unsurprising as Eisner’s were challenging and surprising.

— Here’s another book that’s struggling, as it’s too slow, too text-heavy and completely incongruous with the mainstream Marvel Universe. Why isn’t Jen’s Skrull friend taken in for serious questioning by Iron Man and pals? Why would Iron Man feel the need to show up in person at a minor homicide trial that barely concerns him? How is She-Hulk able to be roaming the country and in New Jersey with the Last Defenders?

— In this issue, Xavier and Magneto talk through their vast histories and how the mutant movement has changed so much that they’re both essentially outdated. "We became irrelevant," Xavier says. There’s a lot of truth to that. And while it’s an interesting moment, the point you can extrapolate is that this book is irrelevant too.