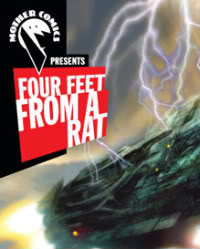 Though the history of comics largely began through free newspaper inserts, that practice has gone unused for decades.

Fitting, then, that such an unexpected distribution model would accompany the release of a new comic book series created by an advertising agency. Mother, the London-based agency best known for promoting Coca-Cola, recently announced it will be shipping Four Feet from a Rat – a collection of comics stories – in the weekly Time Out listings magazine.

Read the full Guardian article right here. Strangely enough, the comic doesn’t even include advertisements. The company explained that it serves simply as a creative outlet for employees.

The story behind the creation is pretty interesting: Mother has a history of offering its services for favors instead of money. The company did some work for Time Out in exchange for pages in the publication. Once they accrued enough pages, they set about making the comic.

Mother partnered with comics publisher Mam Tor for the art on the stories. Guardian comics critic Will Hodkinson said the stories carried on in the tradition of Hellraiser and Sandman.

"This isn’t as good as those comics – it is a little derivative," said Hodgkinson. "One might almost call it a pastiche. But it’s well drawn and well written and it’ll be interesting to see how it develops as they find their voice."

If the book has some success, keep an eye on other publishers who might try something similar.