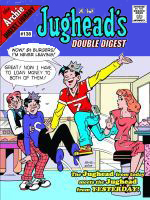 So there I was, at Midtown Comics, one of New York City’s better-racked shops, trying to find something my wife was looking for. That’s the only way you could get me into a comics shop on a Tuesday, the day before the new stuff is put on the shelves. Since I was there, I looked at everything else as well… and came across [[[Jughead’s Double Digest #138]]], a beneath-the-radar book that some will find of note.

This is the issue before the beginning of their latest “new-look” story, this time drawn by my pals Joe Staton and Al Milgrom, so I gave it a second glance. Above the logo, in type too small to be visible in the reproduction I cribbed from Archie’s website, is the phrase “Collectors (sic) Issue Featuring Jughead #1, 1949.” The cover art promised a story where the 2008 Jughead meets up with his 1949 counterpart. The one who only owned one shirt.

Unless you’ve been scouring the ComicMix comments sections lately, it is possible you are unaware that the Archie line is one of the best-selling newsstand comics ventures of our time. In fact, since their digests are available at most supermarket checkouts, they provide an unparalleled portal into the world of comics. Because their content appeals to readers of all sexes and age groups, they appeal to a group Marvel and DC barely acknowledge: the younger reader.

I should point out that Archie is also the last of the publishing houses still controlled by the family of its original owners. That comes across quite clearly in their editorial content, which is quite respectful of its roots. 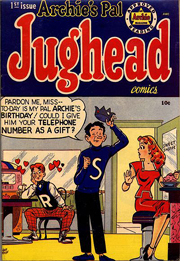 Whereas I enjoy Archie Comics from the 1940s and 1950s (not to mention their often surreal comics of the early ’60s), I hadn’t read Jughead #1, so I glommed onto the book to read it on the commuter train back home – which, coincidently, passes right by Archie’s editorial headquarters in Westchester County.

All the most familiar characters were there, all in their most familiar garb. Whereas the humor and characterizations were of their post-war era (and all the more interesting for that), Archie, Betty, Veronica, Weatherbee, Reggie, and Moose were all pretty much the same.

Jughead… not so much.

For one thing, he wasn’t loveable. He wasn’t an ass, but Jughead was a bit of a misanthrope. He looked and often acted completely indifferent to his surroundings. Later perceived as America’s first proto-beatnik, the original Jughead was aloof to the point of vacancy.

I was a bit amazed to discover Juggie was the school’s math whiz. Maybe my memory is off, but I don’t recall him having that honor during the past four or five decades.

Most important – and bizarre – was the near-total lack of any reference to food. Throughout the past half-century, Jughead Jones was the poster boy for the munchies. He still is. Food and Jughead go together like hydrogen and oxygen. This was the first time I ever read any of his stories without feeling hungry by the end.

Jughead is a cultural icon. Whereas he had been around in Archie stories since the redhead’s 1941 inception, it took eight years – and the virtual death of the superhero comic – for him to go solo. That first issue is comics’ history; check out Jughead’s Double Digest #138 at better comics shops and supermarkets.