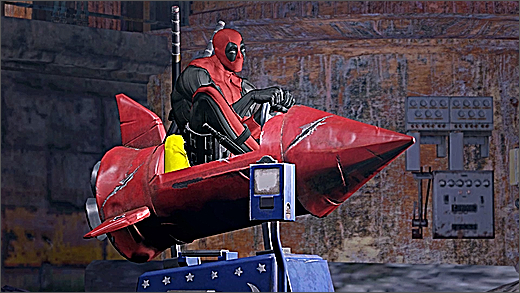 Ladies and gentlemen, I have met the Deadpool game, and it is mine.

Mine, mine, mine! And if you try to take it away from me, it will be fighty time.

When I heard that High Moon Studios was going to be putting out a Deadpool game, I got very excited. I mean, heck, I bought the original Marvel Ultimate Alliance because you can play Deadpool, so no shock there. Then I started seeing the trailers, and I was alternately excited and slightly worried – excited because it looked like High Moon had really done their research, and worried because it’s possible to do the research and still get the tone wrong; in particular, by emphasizing the cruder parts of the character at the expense of the (crazy, off-kilter, a little insane) cleverness. It happens in the comics sometimes, depending on who’s writing the character, and it’s pretty off-putting when you’re used to the cleverer Deadpool. The promos had a lot of bits that seemed to indicate that the focus was going to skew towards gross-out or lame sex jokes instead of witty Deadpoolian banter, and that would have disappointed me to no end. But I shouldn’t have fretted.

Sure, there are some really crude bits in this (M-rated) game – in the very first level, where you get to explore Deadpool’s apartment, you have the option to make Deadpool sit right down and, as the proper British would say it, “use the loo.” But the way it plays out makes it less gross and more hilarious, and completely in character with a Deadpool who knows he’s in a video game. Likewise for most of the other jokes in that vein; it’s all about the context and delivery, and the designers (and Nolan North as the voice of Deadpool) nail it here. That’s not to say that some of the humor isn’t a bit juvenile; or that I couldn’t do without a few of the more misogynistic or sex-related references (did there really need to be blow-up dolls in the game? Really?). Some of those references stem from more recent iterations of Deadpool, which is one reason I’m a much bigger fan of the slightly subtler Deadpool humor of the Joe Kelly, Fabian Nicieza, and Gail Simone eras. But overall, the humor works – and after all, Deadpool is, when all is said and done, kind of terrible a lot of the time. He’s funny as hell to read about or watch, but he’s not exactly a guy you want to invite over to hang out.

Happily, there are also a lot of jokes in the game that have nothing to do with bathrooms (or women’s anatomy), and that actually made me laugh out loud. For instance, when the little scene from the game’s promo pics that made me laugh, with Deadpool riding in a little kiddie ride that looks like a rocket, finally shows up, it is even better than in the promos. And there are numerous bits like that. There was actually only one schtick that really hit a completely wrong note for me – in which Deadpool stops to admire a dead female enemy who’s been impaled on a pole. That made me cringe.

But other than that, playing this game as a Deadpool fan (or even if not, I’d wager) is pure joy. Deadpool is a character who’s well-suited to the over-the-top craziness of a video game – he’s all about violence and fun, and he comes with his own pre-written fourth wall-breakage that can be incorporated in some pretty awesome ways in a video game. For instance, at one point in the game, Deadpool opens a door and sees a pathetically unfinished, half designed, green-gridded hallway. So what does he do? Well of course he closes the door and calls up High Moon to threaten them if they don’t get that hallway finished immediately. The door opens again and, voila! it’s fixed. 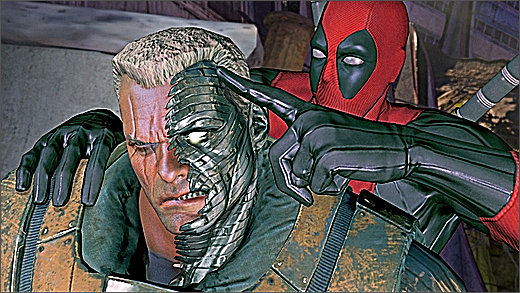 There’s a ton of stuff like that in the game, and the best part is, the game never breaks character. For example, when Deadpool dies, he pops up on the load screen with an apropos quip about the situation (My favorite being the “Oh, hey babe! What are you doing he – Wait, I’m what?” reference to his relationship with Marvel’s Death). Everything is written in a Deadpoolian style, and even though it features what could be a “serious” storyline (the plot is something about Mr. Sinister trying to be evil as usual, and Cable trying to get Deadpool to help stop him and save everyone), this is overlaid by Deadpool’s personal storyline – which is that Mr. Sinister killed Deadpool’s contract hit, so now Deadpool isn’t going to get paid. And Deadpool? He mad. Which means that yep, he’s damn sure going to go through the whole story and give Mr. Sinister what-for, and, oh, yes, inadvertently end up helping everybody at the same time and maybe saving the world and stuff; which is just what Deadpool often does. The result is a video game that does actually have some pretty good substance to it – but is, on top of all of that, just plain fun to play.

The Deadpool game is also pretty awesome to watch and listen to. Deadpool himself looks great, the cutscenes are frequent and fun, and the entire story is rife with references to the Deadpool canon from the moment we arrive in Deadpool’s run-down apartment. From an actual “history of Deadpool” program you can watch on Deadpool’s TV (complete with art from the comics and a great “Lifestyles of the Rich and Famous”-style narrator) to what happens when you decide to cook in Deadpool’s kitchen, it’s all Deadpool, all the time; although there are also some great cameos by characters like Cable, Domino, and Wolverine. You see alternate Deadpool uniforms; glimpse the face behind the mask; and then the writers even lampshade the way Cable disappeared at the end of Cable & Deadpool by giving him an analogous and obviously lame and nonsensical excuse as to why he can’t stick around and help Deadpool with the mission he’s just given him in-game. It’s the little stuff like that which makes this game fried gold for any Deadpool fan.

The settings are also pretty interesting. I was particularly impressed with Genosha, which is actually depressing as hell if you look at the details they’ve put into the already creepy ruins (a merry-go-round upended by a Sentinel head; several random skulls; scrawlings of “Why?? Why??” and “Rot in Pieces” on the prison walls). It’s a level design that would fit right in with, say, Arkham Asylum. And yet in the midst of all this, we get Deadpool spinning the completely random “Wheel of Insanity”…and landing on “Cow.” At which point, yes, an actual cow flies mooooing through the air, amidst a general “magnetic apocalypse” he’s already dialed up – and meanwhile, Deadpool is platform-jumping up to a rather disturbing but funny scene with Mr. Sinister’s clone. It’s the perfect blend of darkness and light, which is what drew me to Joe Kelly’s Deadpool and made me love reading about him in the first place.

I also love that this is a video game that rewards a player for doing nothing. Because of course. For instance, if you turn on the game but don’t start playing right away, the sleeping Deadpool will eventually teleport from chair to couch, changing uniforms. There are also prompts that you can follow at various points in the game; say, to make something that’s driving poor Wade crazy stop – and if you don’t follow the prompt (maybe because you, I don’t know, think it’s funny to listen to Deadpool cry for awhile) he might, just maybe, shoot himself in the head. Which sounds pretty awful, but in context it’s hilarious. Deadpool’s voice work, done by veteran Deadpool voice actor Nolan North and featuring all three of Deadpool’s voices (his real one and the two in his head, which show up as yellow and white boxes just like in the comics), is also hilarious and awesome. North has great comic timing, and delivers even the craziest lines with panache.

I’ve seen a couple of reviews of the game that note that the gameplay can get monotonous; but I’d disagree. Sure, this might not be a game that always requires finesse – although there are a number of combos you can perform, you can also succeed pretty well some of the time just by mashing buttons; and yes, the basic mobs of bad guys can be killed by the same attacks throughout – but the game switches it up with more powerful enemies and bosses, some of which have different tricks up their sleeves, and most of which do require more skill. And as Deadpool you have access to a pretty fun arsenal, which includes katanas, sais, giant hammers, several types of guns, and a number of mines and grenades. And, oh yes, bear traps. Because bear traps. You can also teleport, which is a great dodge when fighting, and is super awesome when you, say, miss a platform and are falling to your death; because the game allows you to simply teleport back to your last jumping-off point.

Just as important as any of the above, though, is that the constant kill-kill-kill of a lot of action games is broken up regularly by hilarious cut-scenes, random dream sequences, and challenges that require different skills from players (platform and wall jumping, rooms with shifted perspective, a crazy turret sequence involving a Sentinel’s boot…). I love a challenging fight, but a game that can also make me laugh right afterwards is way better. And clearly, from what I’ve been talking about for most of this review, a game that is immersive and enjoyable is just as important to me as a game that challenges me as a gamer.

In conclusion, I love this game. It’s like being in a Deadpool candy store full of Deadpool candy; except that this store is definitely not for kids. So if you’re a Deadpool or Marvel fan, or just looking for an engaging game, and you can handle a little bit of crass humor – then I’d say go for it. Get this game. Because if you don’t, Deadpool will get you. With bear traps.

And until next time; Servo Lectio.