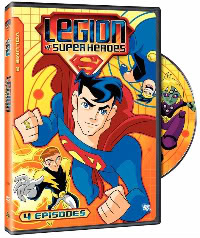 cartoon series is how little I enjoy the team’s comic book adventures. I always liked the concept of the Legion, but the futuristic team has too large of a cast and too complex of a history for me to jump into.

The cartoon series (from Warner Brothers and DC) fixes those two criticisms by hemming in the team size to a handful of key characters and streamlining the background: A young [[[Superman]]] is pulled into the future to help a fledgling group of heroes save the world. Simple enough.

In this second volume (containing the episodes [[[Champions]]], [[[Fear Factory]]], [[[Brain Drain]]] and [[[Lightning Storm]]]), the team goes through a series of challenges that manage to be kid-appropriate without being overly simplistic. Like the legendary Batman: The Animated Series

, the Legion consists of standalone episodes but also builds a deeper narrative of themes and plots, giving it appreciable depth.

Particularly, this volume highlights the character development of Lightning Lad as he becomes a greater hero, and that of his brother, Mekt, as he becomes a villain. Meanwhile, Superman finds his powers have limits, which serves as a lesson as he tries to become the universe’s greatest hero.

I definitely wouldn’t put this series on the same level as [[[Batman: TAS]]], but it’s a fun, clever and exciting foray into the 31st Century.