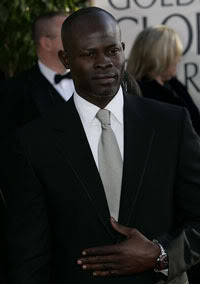 During a weekend press junket for the upcoming film Never Back Down, actor Djimon Housou told IESB that he’ll be taking a role in a comic book trilogy and referred to it as a dream project. The full article is right here.

Hounsou wouldn’t specify which trilogy, though, so the rumor mill can go ahead and start churning. Here’s what the folks at IESB theorized:

The obvious answer is that Hounsou is talking about staring as The Black Panther in the inevitable Fantastic Four 3. Tim Story mentioned in an IGN article nearly a year ago that Hounsou was his ideal choice for the Wakandan King. If this is the case, it’s actually perfect casting (outside of it being another Story-directed Fantastic Four film).

The other possibility, though, that I’m not entirely willing to shake is that Hounsou might be talking about Tintin.

Hounsou mentions that this is a dream project for him. While Tintin may not be the biggest bit of pop-culture this side of the Atlantic, it’s still extremely popular in Europe — especially in France where Hounsou moved when he was 13. Add in the Spielberg connection and the fact that Tintin‘s being done as a trilogy and I think its speculation with some potential.

Hounsou’s page at IMDB doesn’t have any mention of a project yet, and there aren’t a whole lot of other comic book trilogies on the horizon. Y: The Last Man is supposedly in the works, though Hounsou obviously wouldn’t have a place in that, unless the director decided to be very creative in casting Agent 355.