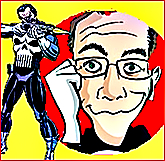 Gerry Conway recently posted a provocative story. He starts off discussing the history of creator rights and profit-sharing in the comics industry, and how he (and others) get paid when their creations are used not only in comics, but also on television, in movies and other media.

And then he says this:

“But, like all companies, it’s a business, and its first priority is to reduce costs, increase efficiency, and maximize profits. So tracking which character was created by which writer and artist team thirty or forty years ago isn’t part of their business plan. It’s just too much work, and it requires a dedication and devotion to detail that only one group in the world has in abundant quantities:

I object to this on myriad levels. Here’s a sampling.

• Fans are fantastic, but they do more than enough when they buy the comics, or the movie tickets, or turn on the television. They should not be used as slave (by which I mean unpaid) labor by profit-making companies. That’s because…

• Comics publishers are profit-making companies, not charities. If they want someone to work for them for free, they should get interns, like the rest of corporate America.

• Paying creators a share of the profits generated from their work is not charity. It’s not even a nice gesture (or rather, not primarily a nice gesture). It is the cost of doing business, especially for companies that deal in intellectual properties (or content, as the kids say). Sure, they might save a few bucks by not paying out for a couple of quarters, but over the long haul, they will lose talent to the companies that pay more fairly. Profit-sharing improves the bottom line.

• Most of the work has already been done. It’s really a matter of moments for some aide to an assistant to look up what’s not already covered here.

• Anyone writing a script that uses a really obscure character, either as a springboard for a plot or an Easter egg for fans, already knows the comics well enough to be able to do the research him or herself.

Now, I don’t know anything about Gerry Conway’s personal finances (which are none of my business). He has a terrific résumé, which includes a bunch of high-paying jobs, and I imagine he has a comfortable life, but then, I’m just projecting. However, as he acknowledges, his proposal will benefit scores of other creators, many of whom can really use the money. I’m not faulting him for his idea, just for the execution.

Warners and Disney (and Sony and Universal etc. etc.) are not the only corporations that treat paying out money as some kind of optional, if unpleasant chore. According to this article, some companies are, essentially, making employees pay for the privilege of receiving their salaries.

Said salaries are frequently not enough to support a family, even when the employee works full-time in a supervisory position.

As comics fans, and as Americans on this Independence Day weekend, when we celebrate liberty and the pursuit of happiness, we need to stand up for the people who make our lives enjoyable. And we need to do it by demanding fairness, not working for free.