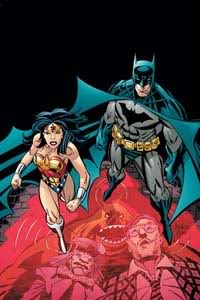 With the recent and much heralded conclusion to Y: The Last Man

and a gig writing for Lost

, Brian K. Vaughan is living pretty high on the hog nowadays. But it can easily be forgotten that Vaughan wasn’t always a superstar writer, and the new collection of comics from his formative years at DC serves as a telling picture of the artist in progress.

($19.99), we’re taken back to Vaughan as a struggling writer, working a day job at the psychiatric ward of St. Vincent’s Hospital in New York. Three stories in the collection feature Batman or his rogues, and the fourth sets Wonder Woman against Clayface.

As Vaughan writes in his introduction: “[A]nyone who thinks that pitting a character made of magical clay against friggin’ Clayface isn’t a totally awesome idea is a dirty communist.” True enough. But while the setup is golden, the execution isn’t. What could have been a deeply introspective story is more cursory and trivial, while also moving a bit too slowly in places.

The Batman stories (which Vaughan wrote later) show the expected improvement. Further exploring issues of identity, Vaughan takes a thoughtful look at Batman’s two-bit-criminal alter ego Matches Malone in one story, and then he explores the diseased mind of the Mad Hatter. When Hatter says, “The only way you shall ever comprehend insanity is by ducking the shallow gerund,” Vaughan reveals the savvy and linguistic dexterity that would go on to make him a star.

[[[False Faces]]] isn’t for everyone, but for Vaughan devotees or those interested in the development of a talented creator, it’s a must-have collection.