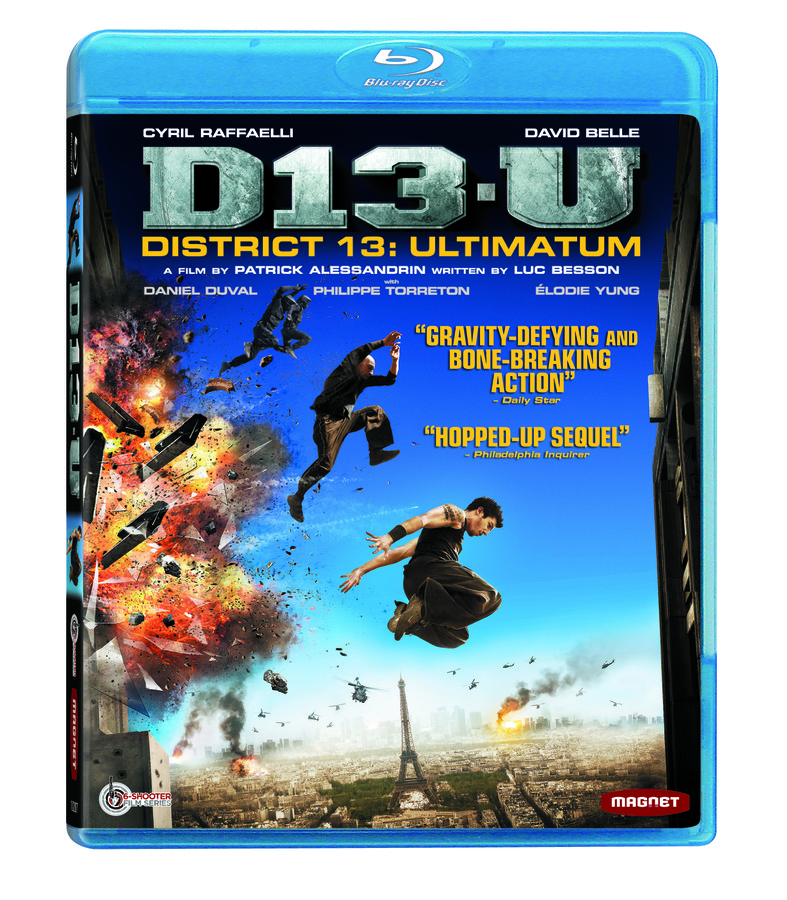 In 2004, action fans were introduced to a brand new style of stunt work, an acrobatic, athletic style called parkour. One of its creators, David Belle, showed off his stuff in [[[District 13]]], which benefited from being written and produced by Luc Besson and directed by Pierre Morel.

Set in the near future of 2010, the French film showed Paris in economic and societal decay with District 13 being overrun by gangs. Rather than deal with the problem the ineffective police wind up building a wall around the ghetto, isolating its two million residents.

The combination of action, adventure, and contemporary issues turned it into a success both in Europe and America. Morel went on to make a domestic thriller, Taken, and skipped returning to the inevitable sequel, [[[District 13: Ultimatum]]]. The film was released last year and is out this week on Blu-ray from Magnet Home Entertainment.

The story, also co-written and produced by Besson, picks up in 2016, with things no better, and possibly worse. Five ethnic gangs vie for control of the lawless land while the police watch from checkpoints. Walter Gassman (Daniel Duval), the leader of the police’s secret service division, has been orchestrating plans to decimate the district and help award the rebuilding contract to Harriburton (not so thinly disguised is it?), with kickbacks making him rich.

To make certain his plans work, Gassman frames Damien Tomaso (Cyril Raffaelli), the best cop in Paris, and has him imprisoned. Meantime, he has his goons kill several policemen, placing them within District 13 so the gangs fire on the vehicle, making it seem the gangs crossed the line. What Gassman didn’t realize was that others witnessed – and recorded – the event. When Tomaso’s former partner Leïto (Belle) is given the footage, he too becomes a target. At much the same time, Tomaso calls for help and the action ignites.

The film cleverly introduces Tomaso on a case, showing some of the underworld life but the movie’s story fails to properly develop the five separate gags and their leaders even though they are pivotal to the final act. Similarly, Gassman is a two-dimensional villain and the only developed character is the unnamed President (Philippe Torreton).

The action and parkour fighting is a marvel to watch but sadly, every bad guy and every cop seems to possess martial arts skills. Five gangs should have had a more diverse assortment of fighting styles, giving some visual variety to the climax. Overall, the themes and basic plot are derivative and contrived but the breathless pacing and buddy chemistry between Belle and Raffaelli helps a lot.

The film, as presented on Blu-ray, is dubbed and the vocal casting is weak throughout. Visually the transfer is adequate and the sound is nicely mixed.

Extras include a nearly thirty minute Making of District 13: Ultimatum which is segmented and fairly ordinary in presentation. Subtitled, it is really only for major fans of the creators. An additional thirty-four minutes of Production Diaries, reusing some of the same footage, provide additional information in the filmmaking process. As you might expect, there are Deleted and Extended Scenes, all of which were additional action moments so the story remains wafer-thin.

Finally, we get French rapper Alonzo performing a Music Video and a useless HDNet: A Look at District 13: Ultimatum, which tells us nothing.