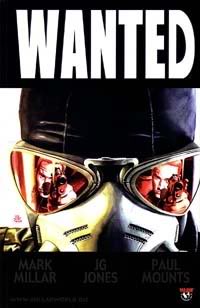 In a bid to excite fanboys for the movie adaptation to Mark Millar’s Wanted, Universal Pictures used its panel at WonderCon 2008 to show an extended clip from the film. IGN has a full report on the clip.

The scene shown was that of Fox (Angelina Jolie) saving Wesley (James McAvoy) from an assassin in a convenience store.  While that bit earned praise, the real excitement came from the ensuing car chase that, at one point, has Fox hanging out of the broken windshield of her car and shooting at the pursuing assassin.

It was "a car chase like no other," according to IGN’s report.

The movie follows McAvoy’s character as he learns his father was a legendary assassin and then tries to follow in his blood-spattered footsteps.

Wanted is directed by Timur Bekmambetov, best known for the Russian films Day Watch and Night Watch. It hits theaters on June 27.