William James and the Superbowl, by Dennis O’Neil 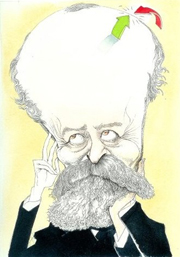 Big game day. As I sit down to write this, the coin toss that will start this year’s Superbowl is about 90 minutes away. Let a hush fall over the universe. The Pats and the Giants are preparing to vie for godlike supremacy. Who’s your favorite QB – Eli or Tom? Me – I’m going for the Giants, not because I know anything about them, but rather because Marifran likes the Patriots and we have this annual bet. Winner gets to choose the next movie. Call us sports.

Wonder what William James would have thought of the Superbowl?

William James, brother of Henry, as the English majors and philosophy fans among you probably know, launched the concept of the “moral equivalent of war.” Although he was a self-proclaimed pacifist, he recognized that war has its uses – he even declared that history would be “insipid” without it. And it does. It hastens technological development, helps young men understand others who are not of their tribe, offers an opportunity for individuals to test themselves (and maybe learn what they really feel), provides an opportunity to develop managerial skills…You can probably add to the list.

War also kills and maims the innocent and destroys economies and nations and minds and brutalizes the survivors and gives money and power to those least deserving of them, such as men who have never fired a shot except, maybe, at forest animals and who knows? – even then the shooter might miss his target and hit a companion instead. Feel free to add to this list, too.

The trick, then, according to James and like minds, is to find a way to do the good things war does, and omit the bad. It’s a trick nobody has learned how to do. But we have some activities that approximate war that don’t do significant harm and may do some good, and sports is one of them. It allows young folk to obey their evolutionary imperative to engage in strenuous physicality with the goal of beating someone or something and maybe copping some glory and admiring glances and, please, let us not knock that imperative; it helped our distant, burrow-dwelling ancestors to claim a home on the Earth’s surface after a big chunk of rock did in the dinosaurs.

Storytelling can be another moral equivalent of war, and I’ll bet that neuroscientists will be able to tell us exactly how in a generation or two. Already, fancy electronics show that thinking about an activity activates the same regions in the brain as doing the activity and surely that indicates where the exploration should begin.

Can we say, then, that it’s a short step from the Superbowl to superheroes? I suppose we can, if we must.

Full disclosure: I won’t watch the whole game, just, if past history is any indication, the last few minutes. Instead, I’m thinking that Mari and I will take in a movie; we’ve got 3:10 to Yuma waiting to be played on the DVD gadget. Well, it’ll be almost like watching the game. I mean, isn’t one moral equivalent as good as another?

, by Claude Anshin Thomas. Thomas is the most extraordinary person I’ve ever met and this, the story of a man who began adulthood as a door gunner killing people from a helicoper in Viet Nam and is now a Zen monk and peace activist, is a truly extraordinary autobiography.

Dennis O’Neil is an award-winning editor and writer of Batman, The Question, Iron Man, Green Lantern, Green Arrow, and The Shadow – among many others – as well as many novels, stories and articles. The Question: Zen and Violence

will be available this summer, and you can pre-order them now.